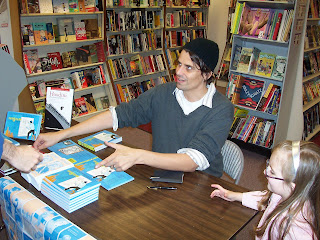 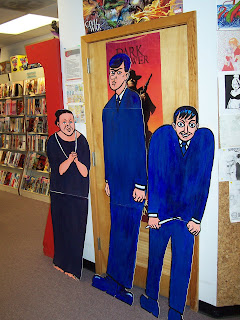 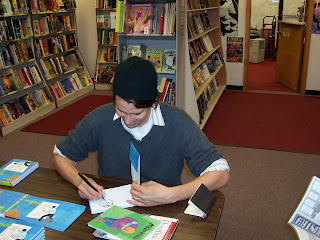 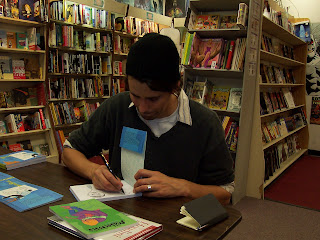 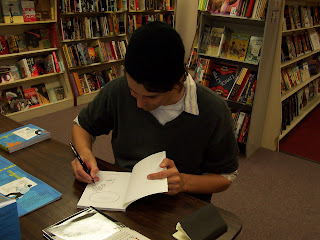 Nick Bertozzi signed his two new books Houdini and The Salon, as well as the older Boswash and The Masochist at Big Planet today. A few non-comics readers stopped in and bought The Salon, which I think is one of the best graphic novels of the year. Nick was very pleasant and it was a joy to talk with him. His 6-year old daughter was there, and was helpful in pointing out when your drawing was dry and you could take your book. ;^) Nick talked a little about his books - showing me the page of The Salon that's gotten Gordon Lee in trouble in Georgia (it shows Picasso's penis swinging as he jumps across his studio) and saying that he never wants to draw another bowler hat after Houdini's crowd scenes.

Nick's got an interesting question he asks when he meets you - I won't give it away except to note that answers were INXS / PIL; Clapton or Jason and the Scorchers; and The Who opening for Herman's Hermits. His next project, which should be excellent, is a graphic novel on Lennie Bruce with Harvey Pekar.

This was a good signing - Nick says he'll be at SPX in the fall - if you didn't make this, go to that. And Tom Spurgeon's got a new interview up.
Posted by Mike Rhode at 10:37 PM