This exhibit is great. Go see it at the Smithsonian American Art Museum when it opens.

Too quick? Yeah, I think so too. In the newly-renovated and renamed SAAM, three large galleries are devoted to the exhibit which was curated by Joel Smith for Vassar College. The exhibit has over 100 drawings, paintings, sketches, masks, and wooden sculpture-type objects, as well as some sketches unique to the Smithsonian. The exhibit follows Steinberg's career from the 1930s until the 1990s. As you can see below, he was capable of a variety of styles of illustration and cartooning. 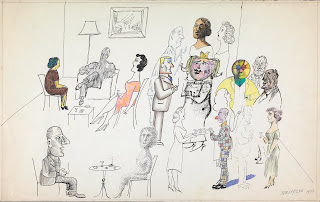 "Techniques at a Party (1953) copyright the Saul Steinberg Foundation / Artists Rights Society (ARS), NY.
By being arranged chronologically, Smith and SAAM curator Joann Moser let us see the development of Steinberg as a cartoonist and an artist as he moves from style to style and experiments with techniques. Steinberg, born in Romania in 1914 trained as an architect in Italy in the 1930s, but also became known as a cartoonist there. He moved to the US in 1942, and became part of the New York art scene as well as a professional cartoonist. His anti-Axis cartoons for PM magazine, although not in the show, were particularly good. 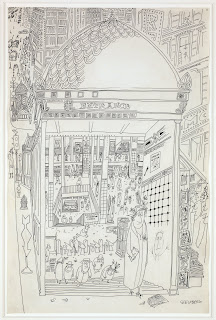 During this time, he developed his graceful and playful line that one thinks of as particularly 'Steinbergian,' assuming one thinks that way. To the left, a good example is "Underground," (1946) copyright the Saul Steinberg Foundation / Artists Rights Society (ARS), NY.

Steinberg also did a lot of commercial illustration and advertising work at this time, doing Christmas cards for MOMA and then Hallmark as well as magazine ads. He also became firmly part of the New Yorker stable. 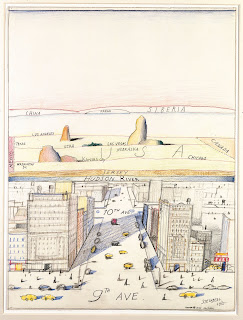 Eventually his 1975 "View of the World from 9th Avenue" would probably become the most widely known cover the magazine ever had. Copyright the Saul Steinberg Foundation / Artists Rights Society (ARS), NY.

One thing that becomes obvious in this exhibit is Steinberg's sense of experimentation. As well as cartooning, he tried photography drawing the famous image of a woman on a bath tub and then shooting it, but also drawing directly on photographs. He did collages, and odd things, like the "Female Mask" below. 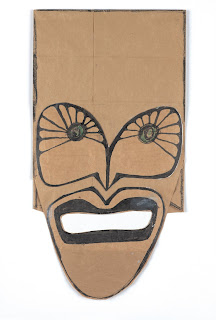 Out of context, the Mask series seems strange and odd. When you see them after years of his experimentation with paper and collage and lines, they make a perfect playful sense. In the 1980s, he moved into making illusions and illustrations with wood. The exhibit opens with "Library," a fake desk with fake books. I didn't really appreciate Steinberg going into this exhibit, but I left with a great fondness for his work. 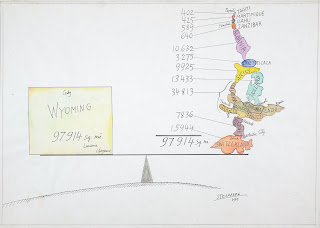 Pieces like "Wyoming" (1969) above demonstrated his love of graphic imagery and whimsical sense of humor. Those of us who only knew his later work, which was sketchier and more stylized, especially the posthumous publishing the New Yorker is doing now, owe it to themselves to see the livelier artworks. Copyright the Saul Steinberg Foundation / Artists Rights Society (ARS), NY.

And there's a big honking catalogue for $65 that I haven't cracked yet.

Go see this show. Let me know what you think.
Posted by Mike Rhode at 6:11 PM

Oooh, I am so there.

Awesome exhibit!
Must be experienced.
The Folk Art section of the museum is wonderful as well...

The security guards in the galleries are a bit overzealous however...."Don't touch nuthin!"
WTF ???