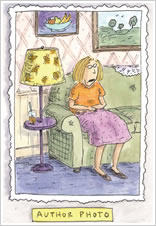 The Express has an article on New Yorker cartoonist Roz Chast speaking at the Smithsonian's Residents Associates Program. The lecture, presumably part of her book tour, is $25 or 15 bucks if you're a RAP member. While I've paid for one of these in the past, notably Mankoff and the other New Yorker cartoonists that were touring with the complete cartoon book a couple of years ago, in general it pisses me off to pay someone to be sold something by them. So I won't be attending this. On the other hand, it appears to be sold out so apparently they didn't need me anyway.
Posted by Mike Rhode at 6:03 PM