Matt Diffee at Politics and Prose 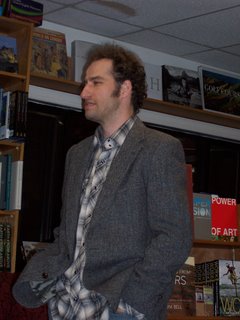 Despite some audiovisual problems which led to us not seeing cartoons rejected from The Rejection Collection, Matt Diffee gave a fun and interesting talk tonight. While A/V concerns were being addressed, he talked a bit about being a New Yorker cartoonist, noting that cartoon editor Bob Mankoff recommends bringing in 10 cartoons a week. The cartoonists bring the cartoons in on Tuesday, Mankoff chooses some and shows them to editor Remnick, and if the magazine buys them, one gets a telephone call on Thursday. The best a cartoonist can hope for is one cartoon chosen - a 90% rejection rate if at the 'absolute top of the game.' 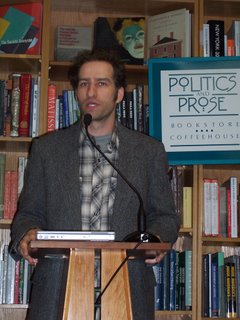 Diffee then showed a short film he made, "Being Bob," in which Bob Mankoff rejects every cartoon he's shown, then rejects every sandwich offered for lunch, then rejects a cab, and then, years later, has a successful transplant operation, if... his body doesn't reject it. Mankoff had some fun there obviously. 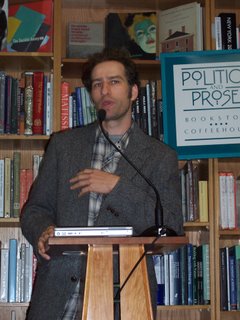 A question about the caption contest led Diffee to describe the process. He said the contest lets the magazine accept and reject the cartoon at the same time. They get about 9000 submissions for the contest. His first cartoon they bought for the contest was a boa constrictor wrapped around a man's date - his caption (or a reasonable facsimile submission) was chosen as a runner-up. Another time his caption did win.
He also talked about his cartoon of Che Guevara wearing a Bart Simpson t-shirt and said it grew out of seeing people in Brooklyn wearing Che t-shirts. Answering a question about the New Yorker's cartoon stable, he said there were about 50 cartoonists, but about 15 do the most cartoons.
A child asked him if he was frustrated - he replied that he's been drawing cartoons for them for 7 years. The first 2 years he was paying his dues, but the 3rd year he was frustrated. Now he recommends just being cynical as easier on everyone. 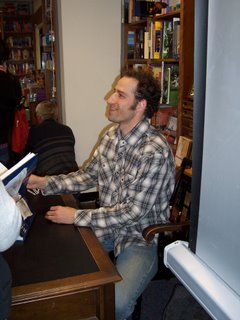 He had to leave for another event, but even so he was personalizing each book with a cartoon as you can see here. The Washington Post should cover this later in the week since Peter Carlson and a photographer were present. It'll be much better written and more interesting then, so I'll link to it. 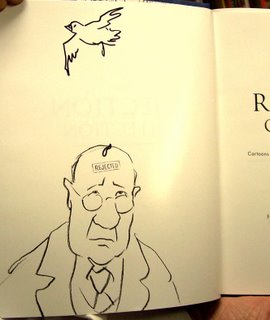 The bird and the poop are added to the title page's facing drawing. 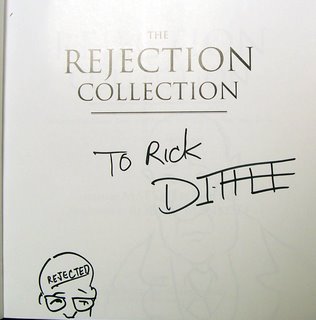 The man with the rejection stamp is drawn anew. 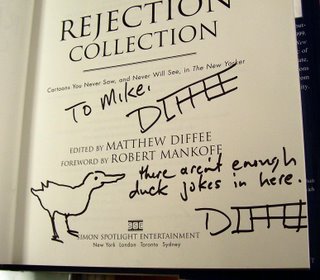