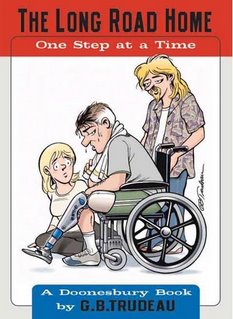 The Comics Reporter linked to this article today in which amputee reporter, Michael Weisskopf, is asked by reporter Ben Steelman about Garry Trudeau. Weisskopf, who lost a hand as an embedded reporter while grabbing a live grenade tossed into the vehicle he was riding in, had this to say about Trudeau:

"Q. You mentioned that Doonesbury picked up the story line of its character B.D. losing a leg. What did the guys on Ward 57 think of that?

A. I think they believe it's nice to have the attention given to their lives. (Doonesbury cartoonist) Garry Trudeau, whom I've met through this process, is a real solid guy. He goes to Ward 57 regularly and uses proceeds from his work to help the Fisher House Foundation, which runs family support centers for wounded soldiers." 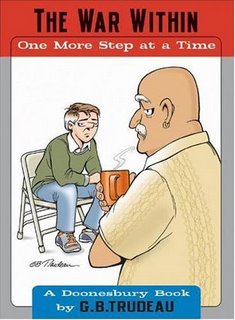 Ward 57 is the orthopedics and neurosurgery ward at Walter Reed here in DC, and information on the Fisher Houses can be found here.. Basically they're apartments for families of soldiers who need long-term care, but they also let the wounded soldier relearn living and domestic skills. The Combined Federal Charity campaign underway now for federal works certainly must have them as a charitable choice. The proceeds from Trudeau's work that Weisskopf refers to are profits from the two books about BD's wounding and recovery, The Long Road Home: One Step at a Time and The War Within: One More Step at a Time.
Posted by Mike Rhode at 8:39 PM