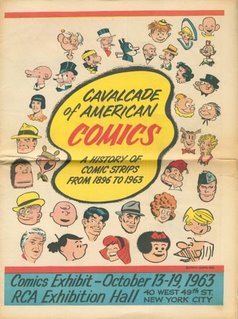 I was recently talking to Joel Pollack of Big Planet Comics about chalk talks he saw as a child at the Smithsonian. Since I'm an archivist, I corresponded with their archivist to see if the talks had perhaps been filmed.

"Chalk Talks" (nine in all) were held in the auditorium at the then Museum of History and Technology (what later became the National Museum of American History). These accompanied the exhibition titled, "Cavalcade of American Comics" that was on display at the Museum of History and Technology, May 2 - July 6, 1966. The exhibit was co-sponsored by the Smithsonian Institution, Washington Evening Star, and Washington Post newspapers.

There is one box containing material from this exhibition and it is Record Unit 334, box 23. It is stored off-site so you'll need to give at least one week's notice before visiting.

I think I will take her up on that and perhaps do a short article for the International Journal of Comic Art at some point. Did anyone else see this show? If so, please leave a comment.

Due to my work schedule I could only go to the Capp and Caniff talks. A few anecdotes. Al Capp was going to the car afterwards with Art Buchwald. He was pretty grouchy, and wouldn't sign an autograph but Buchwald said "Aw Al, sign the autograph for the kid" and Capp begrudgingly signed . I thanked Art, and Thank him again today (!) Caniff gave a chalk talk, and couldn't have been nicer on and off the stage. I talked to him afterwards about getting a drawing, and he gave me his address. I wrote him, and he sent me the original art to a Steve Canyon daily strip. My First original, inscribed and dated June 1966 ( yes, I still have it!), which led to a lifelong collecting interest in original art as well as appreciation for Caniff art and the artist himself. Caniff was the ultimate Goodwill Cartoonist Ambassador. I met collector Joe Goggin at the event, and within a year or so found out about Comic Fa! ndom, Pa flea markets (and Ted Hake!), Abe Paskow and others . 40 years ago seems like a long time, but also seems like a twinkle in a collectors eye.

I never did go down to see that box of records... Somebody remind me after covid-19, please.
Posted by Mike Rhode at 10:42 AM

Sounds fascinating. I've long wish to see footage of Stan Lee's college tours from the 60s. While it's doubtful, I'll be quite curious if there's any audio or video in that box.

Unfortunately, she said there was no indication that the talks had been taped or filmed.

There is nice footage of Stan Lee on Canadian TV at http://archives.cbc.ca/IDD-1-68-2352/arts_entertainment/canadian_comics/

I know that the Smithsonian tape recorded the cartoon talks they did in the 80's, most of which were hosted by Art Wood. They might've even kept the tapes somewhere.

Uh-oh, more research to do.