Meet a Local Cartoonist: A Chat with Clay Jones

Clay Jones is a long-time political cartoonist who also writes an amazingly hardest hitting blog about his cartoons. Here's some quotes from just the past few days:

-"Graham and McConnell have no problems being hypocrites and telling us out loud that they plan to conduct a sham of a trial." (Premature Republicans)

-"If Santa was planning to land his endangered reindeer on the Trump’s roof, the only thing that’d stop the Trump boys from killing them would be if they couldn’t get a guide to hold their hands. You know they’re too wimpy to climb up there on their own." (Run, Run, Rudolph)
-"And if you’re supporting Donald Trump, a bad guy bullying a child, you’re one of the bad guys fighting against America and the rest of the planet too." (Mean Girl Hurts Trump)

Honestly, these days I often read past the cartoon quickly just  to read his commentary.

Clay moved from Fredericksburg, VA (which is technically in our coverage area, but...) to Woodbridge, VA (which definitely is...), was the finalist for 2019's Herblock Award (there's an autobio at that link), has a regular cartoon gig for CNN, and has a new book of his Trump cartoons out, and I'm finally getting around to interviewing him. I apologize to both him and our readers for the delay. As you'll read, he's completely self-syndicated now and you can support him directly. 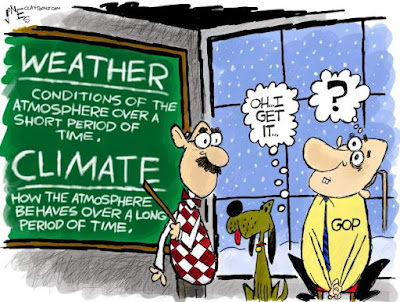 I am a political cartoonist.

I went fully digital in May 2016. I'm now on my second Surface Pro.

I moved to Fredericksburg in 1998 to work for The Free Lance-Star. I stayed in the area after I was laid off in 2012. I moved to Woodbridge two months ago to live in sin with my girlfriend. 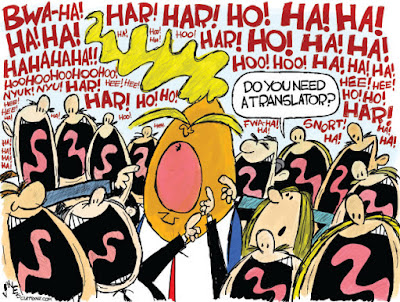 I took a few art classes but failed the last one I took in high school. Can you tell? From there it's been trial, error, a little plagiarism, etc, etc.

If I realized how much I sucked when I was younger, I wouldn't have done that. 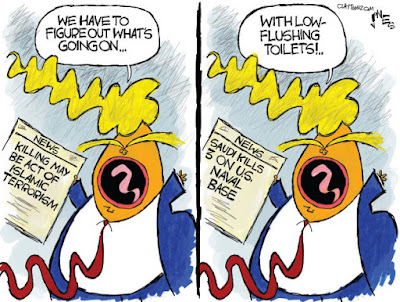 At this time, probably for drawing Donald Trump's hair and tie. I also get a lot of comments on the way I draw his mouth.

Any cartoon that really pisses off the Trump cult.

I would like to work at another news outlet in a fantasyland where they let me draw anything I want, pay me well, and leave me alone.

I don't have time for writer's block. I tell it to go away and power through. Honestly, I try to think what Mike Luckovich or Peters would do, then I try to do something weirder.

Fewer jobs for sure even though that's not justified. We'll still be here but there will be fewer of us. Fewer people will enter a profession that doesn't reward or pay them. Most of us still in it are hangovers from when they used to give us jobs with benefits, vacations, 401Ks and stuff. Most people who do this in the future will have to commit while being distracted by a real job. That will affect the quality.

I'm also afraid publications will get even safer and more afraid to publish anything challenging or critical of anything.

I never had until recently when my girlfriend (the one I'm living in sin with in Woodbridge) took me to the Fairfax ComicCon. It was OK. I'm really not that big of a comic fan. I usually only read political cartoons, party because I'm a fan and partly to see that I don't draw the same idea as someone else.

Food, the diversity, the liberalness, the metro, food trucks, The Post and Politico, the people, culture, museums, history, political bars, and some stuff I'll think of later.

All of them but my favorite thing is to take a visitor from the Roosevelt and walk them around the tidal basin to the Jefferson. 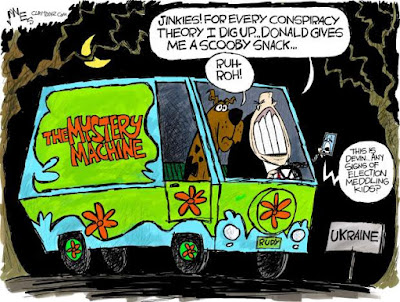 Yes. Do you want to know the address? OK. claytoonz.com. You'll see cartoons, a blog for each cartoon, and even a video where you get to see me draw the cartoon. It's the best political cartoon blog by any self-syndicated political cartoonist.

Clay also posts his drawing videos on YouTube, rough sketches of ideas for CNN, and at least one cartoon a day and often more via his blog and email newsletter. And who can resist closing an internet story with a comparison to Nazis? 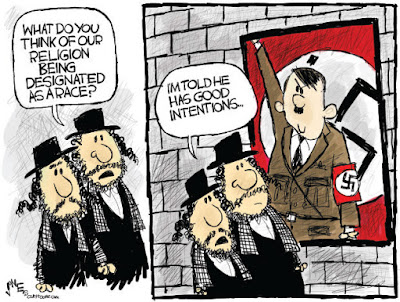 Love Claytoonz, I cannot begin my day without reading his morning blog with the toon. Then I cannot end my day without Rachel. These two keep me from freaking out in the trump era.