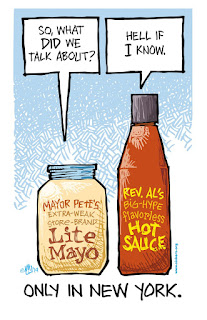 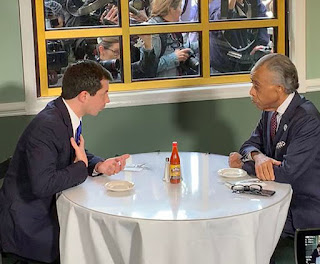 Welp, folks, it's official: Lis Smith is the Sidney Falco of our era.
Who else would have the skills, connections, and moral turpitude to
pull together this ham-handed stunt involving Pete Buttigieg riding
the subway to a joint in Harlem to split a bottle of hot sauce with Al
Sharpton?

It's been reported they discussed racial disparity n'shit, but let's
get serious; this was just a freakin' foto op. They could've been
re-enacting the fake orgasm scene from "When Harry Met Sally" for all
we know. I mean, c'mon, look at all the freakin' cameras in that
place, crowding the window.

The questions I'd like to ask here are: what brand is that hot sauce,
and why haven't they brought out the mayo yet? You know... that big
'ol jar of weak, tasteless, store-brand diet mayo...? Oh, waitaminnit...

"Pete Buttigieg meets Rev. Al Sharpton for Sylvia's lunch tradition —
but what did they discuss?"
The Grio, 04.29.19
https://thegrio.com/2019/04/29/pete-buttigieg-al-sharpton-sylvias-lunch/