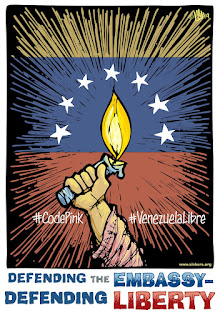 A new low was reached this week when, at the direction of the US Secret Service, Potomac Electric Power Co. cut off the electricity to the Venezuelan Embassy in Washington, in an effort to force out members of Code Pink and other organizations there at the invitation of the staff defending the Embassy against a siege by thuggish supporters of the attempted putsch by US-backed fascist failson Juan "Guido" Guaidò.

This is in addition to ongoing attempts to prevent the delivery of food to the Embassy, ironically mirroring the economic warfare being waged against the people of Venezuela by the US Empire.

"US cuts off power to Venezuelan Embassy with activists besieged inside", RT, 05.09.19
https://www.rt.com/usa/458837-embassy-blackout-activists-collective/