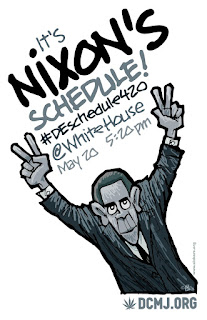 The DEA schedule of narcotics -- in which cannabis is classifed alongside heroin -- was a product of the Nixon era, when the modern War On Drugs started cranking up. Tricky Dick himself, on a leaked White House tape, was said to have called marijuana "...the drug of choice of Mexicans, hippies and n#gg*rs."

Here's former White House Domestic Affairs Advisor, the notorious John Ehrlichman, with a slightly more nuanced framing of this policy in a 1994 interview:

"The Nixon campaign in 1968, and the Nixon White House after that, had two enemies: the antiwar left and black people. You understand what I'm saying? We knew we couldn't make it illegal to be either against the war or black, but by getting the public to associate the hippies with marijuana and blacks with heroin, and then criminalizing both heavily, we could disrupt those communities. We could arrest their leaders, raid their homes, break up their meetings, and vilify them night after night on the evening news. Did we know we were lying about the drugs? Of course we did."
--John Ehrlichman, Nixon Domestic Affairs Advisor, 1994

The DEA schedule is Nixon's schedule, part of a policy born out of deception and racism. It's time to DEschedule cannabis.

We'll be at the White House on May 20, how about yourself?
Posted by Mike Rhode at 3:57 PM