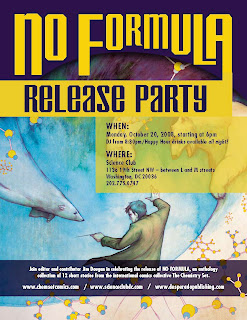 In from Jim Dougan:

October marks the release of NO FORMULA, an anthology collection of 12 short stories from the international comics collective The Chemistry Set through Desperado Publishing. Join the creators in celebrating at events next week in Washington, DC and New York!

Join editor and contributor Jim Dougan (and maybe other suprise guests) in celebrating the release of NO FORMULA! Copies of the book will be available for purchase. Oh, and stick around - a DJ will be spinning from 8:30pm, and happy hour drink specials are available all night!

The Chemistry Set will be out in force to celebrate the release of NO FORMULA. Books will be available for sale, and contributors appearing include: Vito Delsante, Jim Dougan, Elizabeth Genco, Michel Fiffe, Rami Efal, and Kevin Colden.

About NO FORMULA: Haunting. Humorous. Harrowing. Those are just some of the words to describe the short stories compiled in this inaugural collection from the international comics collective the Chemistry Set. Founded in 2006, the Chemistry Set has served as the breeding ground for tomorrow's comic all-stars and includes three Xeric Award winners. Combining talents from America, Australia, Europe and Asia, their chemistry together is seen in stories that range from the heartfelt to the horrifying, from the mythological to the macabre.
NO FORMULA: STORIES FROM THE CHEMISTRY SET, VOL.1
Color / B&W, 120 pp. 6in x. 9in.
Price: $16.99
ISBN-10: 1935002090
ISBN-13: 978-1935002093

For more on The Chemistry Set:
http://www.chemsetcomics.com

For more on Desperado Publishing:
http://www.desperadopublishing.com
Posted by Mike Rhode at 10:01 PM

Thanks Mike! Maybe I'll see you there...?

Possibly! I have to check w/ the wife, and the week is pretty darn busy. Congratulations on getting the book out though!