Joost Swarte was kind enough to sketch in some of his books for me over a cup of coffee at the Small Press Expo. I never thought I'd get to meet him. He's been one of my favorite cartoonists for years. He was very friendly and interesting. His early training in industrial design definitely influenced his work We talked a bit about a recent design of a long stained glass window for a courthouse until he had to go to a panel on Herge, but he thinks I might have the largest collection of his signed books in the States. Heh, I've got more I didn't bring to get signed... (and thanks to Barbara Poestema for bringing two of these back from the Netherlands for me this summer!) Here's shots of the sketches he did. 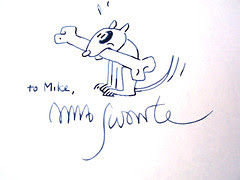 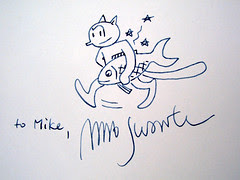 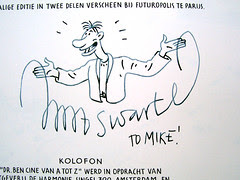 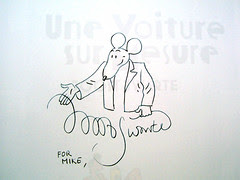 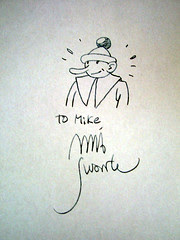 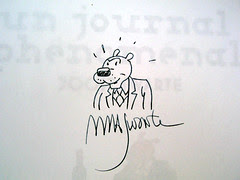 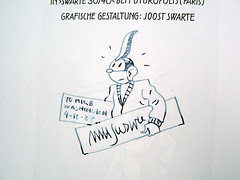 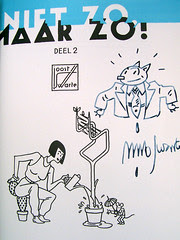 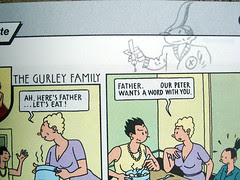 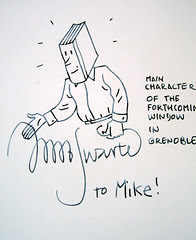 And I met Istvan Banyai, the awesome illustrator, who came to the Expo to see Joost! Another one of my favorites!

Finally, Michael Cavna who I got to meet briefly has a good roundup of SPX quotes online today - "The Morning Line: Obama! Palin! Who's Got the Best Line?..." By Michael Cavna, Washington Post Comic Riffs blog October 8, 2008.
Posted by Mike Rhode at 7:54 PM

Hi Mike!
That's awesome! Great sketches!
I too have been a huge admirer of Joost's artwork since the early 80's and never thought I'd have a chance to talk with him! He signed and sketched in two of my books after the Herge panel and couldn't have been nicer. What a thrill to talk with him. He mentioned during the panel that he had met Herge and I wish now that I had followed up on that. Anyway, I think we did quite well last weekend! Great blog!

Thanks! I'm really looking forward to the book Fantagraphics is doing on him. He had a catalogue of a museum exhibit on his work that's in Dutch - I'll need to track that down too.