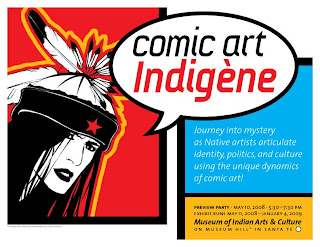 This press release came in this morning and sounds interesting, so even though it's not DC...

Comic Art Indigène: There were cartoons before the Sunday Comics and Super Heroes before the Super Man
May 11, 2008 – January 4, 2009


Santa Fe, NM—Storytelling has long been a part of Native American culture. Comic Art Indigène which opens at the Museum of Indian Arts and Culture on May 11, 2008 looks at how storytelling has been used through comics and comic inspired art to express the contemporary Native American experience. Under the larger definition of narrative art, comic art is more related to Native American art traditions than one might expect. The earliest surviving examples of such narrative art is rock art. The historic examples used in the exhibition, such as photographs of rock art, ledger art, and ceramics are meant to link Native American art traditions with contemporary voices.

Making comics and producing art inspired by them is a method of reclaiming the narrative art form of comics and Native American culture from those who would dismiss an art for the masses. Today, Native American artists are reclaiming stereotypes used in earlier comic art depicting Indians as savage, war-like primitives or trusty sidekicks.

Two-fisted tales of suspense showcasing fantastic heroes and villains interacting with gods old and new have always been a part of Native American Culture. As the first widely accessible mass media, comic strips, and comic books, were consumed by Indian people as a recognizable and legitimate form of storytelling. Stories of humor, adventure and the fantastic depicted through pictures have always been an indigenous practice. Today’s Native American scribes grapple with the same topics emboldened with millennia-old cultural traditions, blended with new methods of expression and life in the 21st Century.

The exhibition begins with a photograph of a cartoon from the 13th century. The image of the red, white and blue pictograph of the All American Man, a shield carrying warrior from the Pueblo II period (carbon dated to ca. 1290) will be contrasted to a drawing of that other red, white and blue shield hurling hero, Captain America. The most recent works will be from 2008. The majority of Indian art will be from 1990 to the present day.

Comic Art Indigène examines how American Indian artists articulate identity, reclaim stereotypes, worldview, politics, and culture through the kinetic expression of sequential art. Inspired by this unique medium, using its icons, tropes and dynamism, this is a new world of American Indian art, full of the brash excitement first seen on newsprint a century ago, sometimes unrefined, even crude at times, but never sterile.

Opening events on Sunday, May 11th , from 1-4pm include a drum group, artist roundtable, gallery tours, costume contest, and family activities including; make your own comic or ledger art, create your superhero emblem, and more.

Also opening the same day will be Bare Nation, an exhibition in the Doris and Arnold Roland Sculpture Garden of the Museum of Indian Arts and Culture created by senior students from the Institute of American Indian Art.

Located on Museum Hill™, the Museum of Indian Arts & Culture shares the beautiful Milner Plaza with the Museum of International Folk Art. Here, Now and Always, a major permanent exhibition at the Museum of Indian Arts & Culture, combines the voices of living Native Americans with ancient and contemporary artifacts and interactive multimedia to tell the complex stories of the Southwest. The Buchsbaum Gallery displays ceramics from the region’s pueblos. Five changing galleries present exhibits on subjects ranging from archaeological excavations to contemporary art. In addition, an outdoor sculpture garden offers rotating exhibits of works by Native American sculptors.

The Museum of Indian Arts and Culture is a division of the Department of Cultural Affairs.

Information for the Public
Location: The Museum of Indian Arts and Culture is located on Museum Hill™, Camino Lejo off Old Santa Fe Trail.
Information: 505-476-1250 or visit www.indianartsandculture.org
Days/Times: Tuesday through Sunday, 10:00 A.M.-5:00 P.M. Between Memorial Day and Labor Day the Museum is also open on Monday.