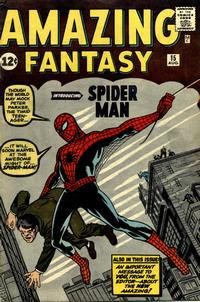 The first appearance of Spider-Man, an 11-page story which includes his origin, now belongs to the American people. According to curator Sara Duke, an anonymous donor has given the 24 pages of original interior artwork from Amazing Fantasy #15 to the Library of Congress' Prints and Photographs division. The artwork, drawn by Steve Ditko and written by Stan Lee, first appeared in print in 1962, and is in good shape. The art has some whiteout where features of the women were modified, apparently not by Ditko, as well as pasteup word balloons. According to Sara, who called it a "lovely and generous gift," the donor checked with Ditko before donating it, and was told that since the story was a gift to him (although not from Ditko), he could do what he liked with it. The donor declined to have it appraised when giving it to the Library so the actual value of the gift is unknown, although certainly in the six figures range. Three other non-superhero stories were in the book - "The Bell-Ringer", "Man in the Mummy Case", "There are Martians among us!" - and were also donated.

Sara hopes that the Library's collection of comic book art will continue to grow with similar donations since they can't afford to buy them.

Members of the press should contact Donna Urschel in the Public Affairs Office, 202-707-1639.

This post has been corrected from an earlier version.
Posted by Mike Rhode at 6:07 PM

So can the public go and actually check this out???

Yes, by appointment. I'll modify the post with the information later.

THE PAGES ARE WORTH MILLIONS OF DOLLARS ON THE LOW END - PRICELESS ON THE HIGH END. CANT WAIT TO SEE PICTURES!!!

Hi Mike! I talked about you today in my daily press agency afnews.info.
Best! :-)
http://www.afnews.info

I hope they make yjem available electronically as well.

Self-referential, but this has gotten a little play on The Comics Journal message boards where attitudes can be a bit different...

...although I'm sure Sara appreciates being thought of as a 'chick'
http://www.tcj.com/messboard/viewtopic.php?t=4371

Somebody big has linked to this story as I'm getting far more hits than usual - anyone know who?

Gianfranco, thanks for the link, and thanks for letting me know, since the automated link catcher didn't catch it. I see by my widget map I've got some Italian readers today.

Oddly enough, the Friends of the Albany Public Library linked to this too
http://aplfriends.blogspot.com/2008/04/original-spider-man-artwork-given-to.html

In the Library of Congress blog there are a few pictures of the originals!

I have that comic, and its in its original package.