Cartoons in Hay-Adams Hotel's Off the Record bar

Last night I had dinner with Alan Gardner of the Daily Cartoonist blog, Post relationship cartoonist Nick Galifianakis, Politico cartoonist Matt Wuerker and, oh yeah, Richard Thompson. A good time was had by all, I think and Alan will be posting pictures on his blog (link to the right) at some point. But perhaps of interest to local readers is the cartoons hung in the Off the Record bar in the Hay-Adams hotel on 16th St, NW just off of Lafayette Square. Ed Vallaton's late-1960s caricatures were in a David Levine vein, and were the most numerous. I don't know anything about Vallaton, but the people were recognizable even 30 years later. It was a bit weird seeing a bunch of dead politicians and still recognizing them. Also on display were caricatures by Ron Coddington - these may have been slightly better drawn, albeit in the big-head manner, but I recognized less of them.

A few random pieces were scattered around - two of Richard's color cartoons, dedicated to Art Wood, and what appears to be some pages from Puck or Judge. But of the most interest are 15 color caricatures of presidential candidates and politicians that the bar has rented from Richard. There's John Edwards, Hilary Clinton, George Bush, Karl Rove, Barack Obama, and others, all framed next to each other in a 5 x 3 grid. Very cool. Again, watch Alan's blog. 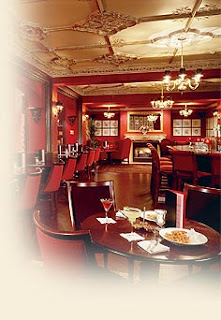 In this picture from the bar's website, we're looking into the room from about where Richard's cartoons are. The ones directly ahead on either side of the fireplace are Coddington's and they're flanked by Vallaton's.
Posted by Mike Rhode at 8:41 PM