Every once in a while, a Washington Times comes to hand and I read the comics and editorial cartoons. Here's one by Combs of Tribune Media Services that struck me today. 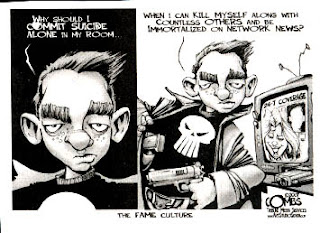 Perhaps most people wouldn't notice it, but as you can see the skull on the kid's shirt is clearly the Punisher's emblem. 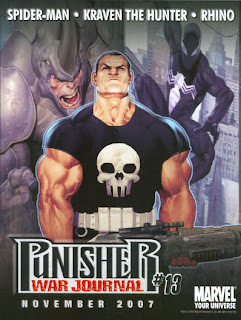 The average non-comics reader would probably have heard of the two failed movies, the second with John Travolta, but the Punisher's been around since the early 1970s. He's from the time when Dirty Harry was in the theaters and The Destoyer and The Executioner were in men's novels.

I have no idea if this is drawn from life and some mass murderer really wore a Punisher t-shirt, or if the artist just liked the image, or what, but it seems like Marvel might end up with some image problems if cartoons like this one continue.
Posted by Mike Rhode at 5:42 PM