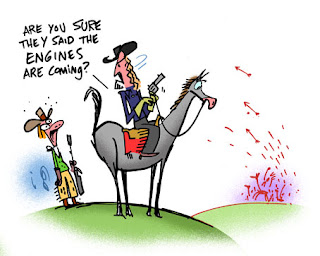 The Post's Style Invitational contest last week "supplied several "captions" and asked you to describe the cartoons they would accompany: The Empress posted this contest, at the Czar's suggestion, with some trepidation, concerned that dozens of descriptions of undrawn cartoons would just be too tedious. She concedes that her fears were unfounded, and therefore owes the Czar the heart cut out of her chest. Invitational Cartoonist Bob Staake chose this week's top four winners from the entries below, and will personally deface each winning sketch with his signature as a prize."

You can see the other cartoons and suggested captions through the link.

Meanwhile, Richard Thompson and 'Richard's Poor Almanack' continue to "be on vacation."
Posted by Mike Rhode at 8:02 PM