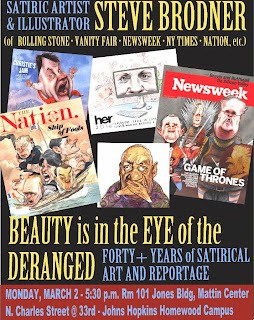 Steve Brodner will be speaking on Johns Hopkins' Homewood Campus at 5:30 on March 2. See the image for more details.
Posted by Mike Rhode at 10:43 AM No comments:

Cartoonists atypically in the local papers

Steve Brodner had a lovely piece on Newt Gingrich in yesterday's Post.
In today's Politico on p. 6, local cartoonist Kevin Rechin has an uncredited ad cartoon of "Current Restrictions on Credit Union Capital," with a drawing of people walking down the road to economic recovery while donkey and elephant push a boulder with the Restrictions title onto the road.


Also in today's Politico, Matt Wuerker has a drawing of Catherine the Great, illustrating a story about her.
Posted by Mike Rhode at 3:16 PM No comments:

Steve Brodner illustrated Dana Milbank's column I'm declaring February a Palin-free month. Join me! in today's Washington Post but the excellent drawings aren't online at the Post site, but Mr. Brodner has them at his site.
Posted by Mike Rhode at 7:39 PM 2 comments:

The excellent caricaturist Steve Brodner did illos of some of the most famous women politicians in today's Post's Outlook section. The images don't appear to be online.
Posted by Mike Rhode at 7:42 PM No comments:

Steve Brodner has nice caricature buried in the Outlook section.
Posted by Mike Rhode at 6:32 PM No comments:

In addition to the Jen Sorenson story mentioned a few days ago, Steve Brodner covered the Travel section. In the Business section, Disney's investment into healthy food is examined.
Posted by Mike Rhode at 9:11 PM No comments:

Brodner's one of the best caricaturists working regularly and I was lucky enough to hear him speak a few years ago at SPX. Here's a new interview with him - "MoJo Audio: Meet Cartoonist Steve Brodner: Satirical illustrator Steve Brodner talks about Newt Gingrich, Richard Nixon, and which senator he most wants to draw," by Nikki Gloudeman, Mother Jones podcast April 3, 2009. The direct download is http://www.motherjones.com/audio/download/21368/brodner_final.mp3
Posted by Mike Rhode at 10:12 AM No comments:

The Opinion section has what purports to be "The Year in Cartoons." It's not a very good selection. 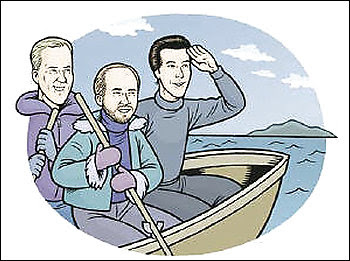 Steve Brodner illustrates 2009 predictions in the last Sunday Source section, which also presumably means that we won't see Danny Hellman's illustrations in the paper anymore either.

A wire story on Broadway's Shrek musical (sigh) was interesting - "The Star of 'Shrek' Basks in the Green Light," By Kristen A. Lee / Associated Press, Washington Post Sunday, December 21, 2008; M10.