So a clump (gaggle? flock? murder?) of cartoonists walk into the American Visionary Art Museum's giftshop...

Sure, it sounds like a shaggy dog story, but this past weekend I went to the museum with a group of local cartoonists, and someone opened a flat file drawer in the gift shop, and pulled out a 'Ding' Darling panel. 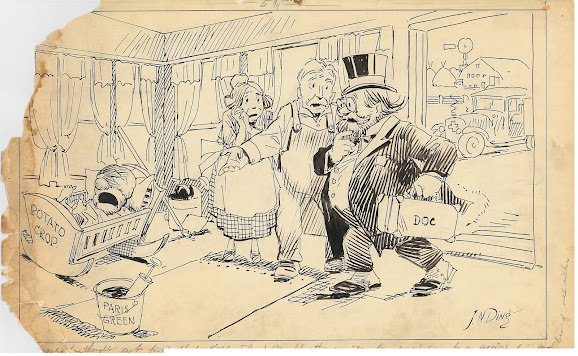 Scan, with caption cut off

There were 3 of these, which appear to tell the story of a young potato growing up into a crop. Barbara Dale said she and another friend had already bought 2 others on a previous visit. I bought this one.

The next strips I pulled out were 'Lolly' by Pete Hansen, a working woman gag strip that I read in the New York Daily News as a kid. It started in 1955, but these are from the 1970s when I was reading it.

Finally, there were 3 strips by Carl Ed of 'Harold Teen' fame. These 'Victor Veribest' strips seem like they might just predate 'Harold Teen' that started in 1919, or more probably, be running parallel to it as an advertising strip for an Armour Hour radio show of which I've found mentions of for 1929 and 1933-1935. I'd be glad to hear from anyone with more knowledge about them.

UPDATE: My friend, the crack comics historian Rodrigo Baeza, comes through "I found a sample of the Victor Veribest strip that ran in 1933: https://the-avocado.org/2018/05/10/thriftstorm-6-news-and-views-of-armour-crews/ And a few years ago Rob Stolzer was selling another original (which he believes was done in the late 1920s):https://web.archive.org/web/20180509214243/http://www.comicartfans.com/gallerypiece.asp?piece=1326468  I was just reading a couple of days ago that Carl Ed was one of Roy Crane's teachers at Chicago's Academy of Fine Arts in 1920."

So, the strip is actually for the Armour meat company's internal newspaper. And these 3 strips more than double the amount of them that can be found on the web apparently.