I spent much of Sunday at the National Building Museum watching the CANstruction event.
As the sponsoring group AIA | DC (the Washington Architectural Foundation) explains it:

Canstruction is a nationwide program that aims to raise awareness about hunger. In DC, Canstruction is organized by the Washington Architectural Foundation as a creative design-build competition that benefits the Capital Area Food Bank through donations of canned goods. Teams from architecture and design firms from Washington, DC use their skills to build sculptures out of cans of food. The nutritious shelf-stable food is donated to the CAFB for distribution to those in need after the event.
This year's theme was Children's Books and each structure highlighted a different book.

This year, there were 21 teams competing here in DC.  They've used all the normal state-of-the-art design tools to come up with their sculptures made of cans.  The structure with the fewest cans used 891 of them.   The most complicated used 5,942.

The rules include that they can't start working with the cans until 12 noon and they have to be done by 6pm.  I spent 1-3/4 hours photographing before going to lunch, coming back an hour later to find that several teams had already finished.  Three teams were still working until 5:30 or so and one finished just before 6pm.  I left with the last team. 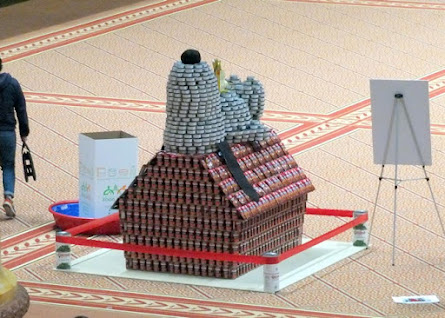 Two were directly influenced by comics -
* Charles Schulz ("Peanuts" -- Snoopy on his doghouse with Woodstock on his chest
* Joe Simon and Jack Kirby (Captain America's shield)
Your only chance to see these pieces, other than through my photos, is in person this Friday to Monday (the NBM is only open four days a week).  Then they're gone.  I suspect a few of them will collapse before the end of the show. 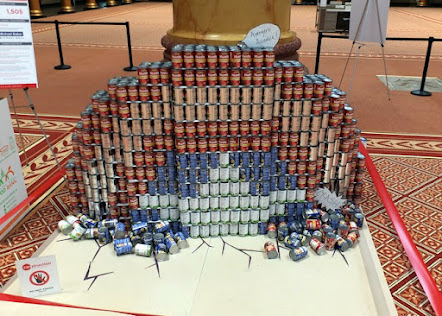 If you've never been to the National Building Museum, it's well worth the trip.  The installation is located in the main hall of the museum building and it's free to see them.  Their regular exhibits are described on https://www.nbm.org/exhibitions/current/ .  I really liked the "Gun Violence Memorial Project" (also free) and "Animals, Collected" ones. The museum is next to the National Law Enforcement Memorial and is directly across from the entrance to one of the Judiciary Square stops.

I took too many photos (and have to come back and take more for the signs I missed) and had to divide them into four separate pages.  If you want to see all 750-ish of them, try this link:

http://www.bguthriephotos.com/graphlib.nsf/(Merge)?OpenAgent&merge=DC_Canstruction_211121&opt=event
The complete list (as they line up on the floor):