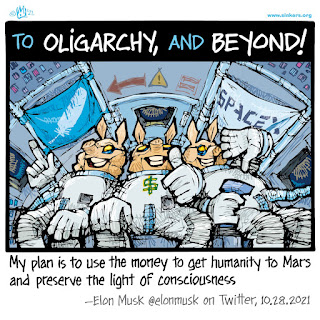 From Mike Flugennock, DC's anarchist cartoonist -
"For All Pigkind no. 2: To Oligarchy, And Beyond!"
http://sinkers.org/stage/?p=3333

So, Jeff Bezos thinks he can tug at my old Boomer heartstrings by
sending up 90 year-old William Shatner (and his toupee) on Blue
Origin's latest suborbital joyride, while continuing to shit on his
workers and dodge taxes. Meanwhile, Elon Musk has opened new vistas in
whiny excuses for not paying taxes on his obscene wealth by puking up
a bunch of balloon juice about Mars and "the light of consciousness".
Nice try, guys — but, no. Also a big "no" to these guys at the Space
Review trying to spin it as an important insight into the effects of
microgravity on old rich and famous people.

And elsewhere in the Space Review, one of their regulars can't shut up
about the "normalization of space tourism" — for anyone who's so
goddamn rich they have the price of a long weekend at the ISS lying
around under their sofa cushions.

"How space tourism could affect older people" by Nick Caplan and
Christopher Newman at The Space Review, 10.25.2021
https://thespacereview.com/article/4269/1

"Elon Musk criticized the billionaire's tax once again, and said he
would use the money to get to Mars" by Ben Gilbert at Markets Insider,
10.28.2021
https://markets.businessinsider.com/news/stocks/elon-musk-billionaire-tax-mars-2021-10?op=1

"Bezos Wants to Create a Better Future in Space. His Company Blue
Origin Is Stuck in a Toxic Past" By: Alexandra Abrams, Former Head of
Blue Origin Employee Communications, and 20 other Blue Origin
employees, 09.30.2021
https://www.lioness.co/post/bezos-wants-to-create-a-better-future-in-space-his-company-blue-origin-is-stuck-in-a-toxic-past

Mike Flugennock, Political Cartoons: http://www.sinkers.org/stage
and follow me on Mastodon at https://mastodon.social/@flugennock