Open Borders: The Science and Ethics of Immigration 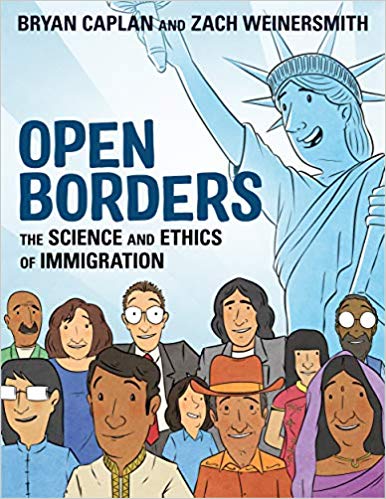 In their new graphic nonfiction book Open Borders: The Science and Ethics of Immigration, authors Bryan Caplan and Zach Weinersmith turn the heated public debate over immigration on its head by proposing a radical and controversial solution: open borders. Caplan argues that opening all borders would practically eliminate absolute poverty worldwide and usher in a booming worldwide economy―greatly benefiting all of humanity, including Americans. With a clear and conversational tone, exhaustive research, and vibrant illustrations by Zach Weinersmith of Saturday Morning Breakfast Cereal fame, Open Borders makes the case for unrestricted immigration in a new format sure to spark lively debate. Caplan and Weinersmith will be joined by Tim Kane, the JP Conte Fellow in Immigration Studies at the Hoover Institution at Stanford University, who is a supporter of liberal immigration laws but a critic of open borders.
Posted by Mike Rhode at 8:23 PM