Ron told me about this before SPX and I keep forgetting to post about it. I've bought volume 1, and will be ordering 2 soon. Williams was a great cartoonist, and it's nice to see his work in print again. (ComicsDC doesn't get anything out of your orders from Amazon, where these books are sold, btw, and we don't accept any other advertising. We do take free review copies of books when offered though.) 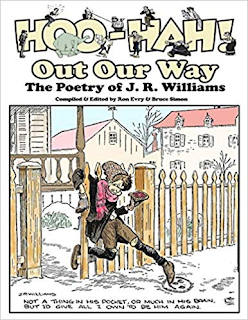 J. R. Williams has often been called "The Mark Twain of the American Newspaper Cartoon." This volume is first of a series devoted to J. R. Williams' long-running "Out Our Way" panels (1922-1957). It deals with the remarkable poetry contained in his comics, sometimes hilarious, sometimes touching, and always authentic. Williams himself left home at an early age and worked as a cavalry man, a cowboy, and machinist. His true-life experiences became the basis for his cartoons, and his panels were among the most clipped ever to appear in newspapers. To this day, "Out Our Way" scrapbooks from the twenties and thirties still regularly show up at estate sales and thrift shops. The editors of Hoo-Hah! have restored Williams' drawings from yellowed clippings to look like they originally appeared when first printed -- large formatted and with clean lines. In the near future, more Hoo-Hah! publications will be printed, devoted to single subjects, or a variety of Classic American humorous stories, comics, and film. Robert Crumb says, "I found the J.R. Williams book great. Never saw those cowboy cartoons before. They are rich, they capture the sweeter side of the cowpoke way of life but obviously avoid the rowdy, alcohol-induced violent side, the bar fights, the whoring, etc. J.R. had a beautiful inking style, plus he could really draw… By all means, full speed ahead in more J.R. Williams books!" 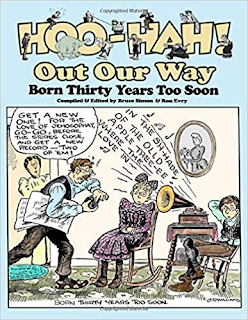 This volume is the second of a series devoted to J. R. Williams' long-running "Out Our Way" panels (1922-1957). The "Born Thirty Years Too Soon" cartoon panels manage to be both funny and touching, each one carrying his own authentic real life experiences of the late nineteenth and early twentieth centuries.
Posted by Mike Rhode at 8:13 PM