Catching up with Josh Kramer

Next week, I'll be moderating a Nerds in NoMa panel on March 12th on "Comic Converts: The World of Comic Illustrators in D.C." One of the attendees will be Josh Kramer, and it's been 6 years since I talked to him for the City Paper, so it was time to check in with him again. 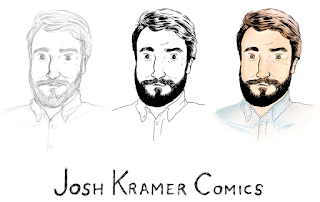 You've kept doing cartoon journalism in those years, although I think you moved to the midwest for a while. Is that correct?


Yes. I was a 2017 Knight-Wallace Fellow at the University of Michigan, so I moved to Ann Arbor for nine months and got to learn up close from Phoebe Gloeckner and dive deeply into visual journalism. I just took a lot of different classes and tried different things. I did my own NaNoWriMo and drew a first draft of a fiction graphic novel I doubt anyone will ever read, but it was fun!

And you've started doing daily drawings on Instagram? What's your objective for those?


Yeah, I have this series, that I aspirationally draw once a day, where I just recreate something that sticks out to me and try to have fun with it. Nonfiction comics usually take a while and require lots of planning, so it's nice to just sit down and draw something in one go — they're easy to start and finish. I like the "first draft" quality of it, and I don't think people are expecting a masterpiece or perfect composition. I've always liked watercolor and colored pencil, and now I have an excuse to mess around with them a lot more. I'm already working on a freelance piece where I'm using this style, so it's creeping into my other work, in a good way.


You mentioned to me that you've moved on from concentrating on food stories to being interested in cities and transit. Can you give us more details?


Sure. I started as a generalist, moving from one weird, idiosyncratic story to the next. But a little while ago I noticed a pattern: I like drawing and writing about cities. So while I'll still write about cheese and other topics with no urban connection, I've been dialed into issues like transit, housing and architecture. I'm writing regularly for Mobility Lab and writing comics like this one that dig into urban policy. I've been doing a lot of drawn infographics, which have really focused me.


Is Cartoon Picayune, your zine collection of cartoon journalism still being published?


I don't have any plans to publish new issues, but you can still buy the old ones. I've very proud of those comics and think they hold up pretty well. Meanwhile, venues like The Nib have really unlocked the potential of nonfiction comics on the internet. There's so much good content being published online, that instead of editing a print publication, I write this newsletter and curate the best of what's out there.


I've seen your byline on some graphic novel reviews lately too. How did you get into that? What do you typically like to read?


Yeah I'm doing some writing about comics, mainly for The Comics Journal. I'm really leaning into the confusion about what "comics journalism" means. Since the Fellowship, I've been trying to live fulltime as a freelancer and that has meant trying to write and draw as much as I can, wherever I can. I'm new to comics criticism, but I'm hoping, as a working cartoonist, to bring more nuance and depth to the critical conversation around drawing and to write in an accessible way. My bread and butter is obviously nonfiction comics, but I like fiction as much as the next guy and grew up sitting on the floor at Borders, reading superhero comics and manga. So I'll read anything! For a little more about my recent journey in freelancing, I wrote about it here.