A Remembrance of Ellen Vartanoff

I don't remember exactly when or where I met Ellen Vartanoff, but there's a good chance it was October 4th or 5th, 1975 at a small comic convention (my first) at the Howard John's Motor Lodge in Wheaton, Maryland. Gene Carpenter made the introductions as I recall. That makes Ellen my third oldest acquaintance in the local comic community. 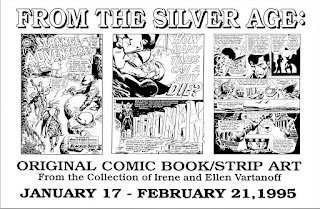 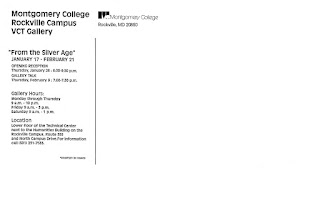 Of course, I got to see my new friend on a regular basis at convention after convention. It was sometime around 1978 when I, with one of her former art students, discussed an idea to publish a portfolio of comic art by Ellen's then-current art students, but that never came to fruition. It would be nearly four years until I again ran into Ellen at local comic shows, but that came to an end when I stopped attending comic conventions altogether by 1984. I did see her at a tiny show in Gaithersburg, Maryland (date unknown, possibly early 1990s). I missed her at an exhibit at Montgomery College in Rockville, Maryland that featured comic art in her and her sister's personal collection - as well as a small show in Rockville where Jerry Robinson appeared - and several of the SPXs. Finally, by 2012 or 2013 I started going to the Baltimore Comic Con every year and ran into Ellen a couple of times.

The last time I saw Ellen Vartanoff was Friday September 22, 2017 at approximately 5:00pm, at the (18th Annual) Baltimore Comic Con. We were standing at booth #813.

OK. How can I remember such minute detail with clarity? It's easy. I have only attended the Baltimore show on a Friday (less crazy than Saturday or Sunday). I typically wind up my day at the show standing in front of Gene Carpenter's tables, which seems to be a gathering place at that time for old friends, some of whom I've known since my earliest days of collecting in the mid-1970s. When I pull my copy of the convention souvenir program, it shows booth # 813 as being All-American Comics (Gene Carpenter). Last year I was not at Gene's tables late on Friday. I don't know if Ellen was around, but I did miss Johnny Knight.


Ellen was, as usual, all grins and was genuinely excited to see me. I was proud to introduce her to my son-in-law. Our conversation was the typical cocktail of sharing the day's adventures on the  convention floor, catching up on current life events and other goings-on, and remembrances of past shared moments. I remember telling her about a project I have in the works that focuses on Mark Feldman, someone Ellen knew. Mark ran the Maryland Funnybook Festival between 1973 and 1978. My research revealed that Mark had made up pinback buttons that were given as freebies to those attending his first show. I remarked about the unexpected discovery of such detail and wondered rhetorically about the chances that such a throwaway item might still exist nearly 45 years later. Ellen said she wouldn't be surprised if she had one and encouraged me to follow up with her about it on the off-chance she might uncover the button. I also told Ellen that I had made it a daily routine to post on Facebook the recognition of birthdates of comic and animation creators past and present as well as comic strip creators, gag panelists, illustrators and so on. I am not at all alone in recognizing these events and certainly not the first or last. I do prefer to commemorate birthdates as opposed to anniversaries of deaths and told her so. Ellen looked at me smiling ear-to-ear. "That is really NEAT!" she exclaimed. Despite how trivial compared to The Important Things In Life, Ellen made me feel in that place at that moment that my obsession was the coolest thing ever.

In the time since, I did attempt to call Ellen on one or more occasions, without success. I did learn that she had taught art classes at the Black Rock Center for the Arts in Germantown, Maryland and was frequently on the schedule for Wednesday afternoon sessions. Since that's about a ten-minute drive, I made a mental note to pay a before or after class visit one day so we could catch up. Rather than dropping by unannounced, I decided to call her, so she'd know to expect me. It was about a week to ten days ago when I finally got around to it. A gentleman answered the phone and said he'd put her on. In a few moments Ellen came on the line. It was obviously difficult for her to communicate but I shortly learned she was "...in Stage 4...". Not wanting to exacerbate her discomfort, I said I'd reach out to her shortly. We hung up and I dropped what I was doing to write Ellen a letter which I put in the mailbox that day. 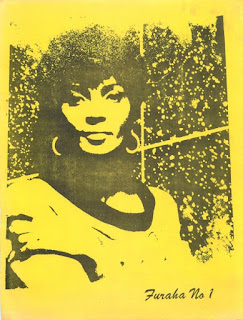 Two days ago, I got a call from Ellen's sister Irene. She shared the very difficult news that Ellen was in hospice care. Irene said she was trying to track down a mutual friend so she could let him know. She'd gotten my number from another longtime friend. Though Irene and I had never met, she recognized my name from the letter I'd written to Ellen. I'm not skilled at the type of conversation I had with Irene. I stumbled through my attempt to express my regrets for what she was going through  and my appreciation for Ellen's friendship but promised I'd pass her message along as quickly as possible. Yesterday morning I learned that Ellen lost her valiant battle.

The thing is, I have this false idea that I'm still young and have all the time in the world to refresh old friendships, even when faced with evidence to the contrary.

Ellen Vartanoff was a fan, a collector, creator, artist, teacher, mentor and so much more to countless friends and admirers. Condolences to Irene, Scott, and all of Ellen's family. I will always carry with me the last time I saw Ellen.

Farewell, Ellen. You are missed already but always with us.

[editor's note: A 1997 Washington Post review of one of Ellen's exhibits, but not the one Stu refers to above.]

Images that I took where I tagged Ellen... http://www.bguthriephotos.com/graphlib.nsf/(MergeI)?OpenAgent&opt=IFIND&merge=Vartanoff

I think I took a cartooning class from her when I was in middle school. I remember being driven to Maryland. Ellen was lovely and encouraging!

Ellen was my cartooning teacher in the late 70's to the early 80's. Much of my life trajectory can be directly attributed to Ellen's influence and encouragement in my formative years. I'm profoundly sad to know I will not see her at SPX any more.

Thank you, Stu, for this.