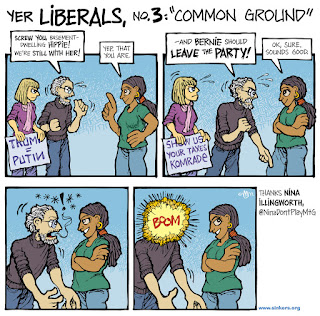 For the better part of a year and a half, Liberals have been screeching about how Sanders wasn't "a real Democrat", saying he was "damaging" the Democrats and that he and his supporters should leave the party -- and after a year and a half of bullying, public insults, blame-shifting, gaslighting and other abuse, most progressive Democrats and other Left constituencies are thinking that ditching the Democratic Party sounds like a helluvan idea.

Needless to say these days, Liberals aren't getting the reaction they're hoping for from the Left on that point and, of course, the Liberals are having kind of a hard time getting their heads around it. Seems that finally, Liberal Democrats and the Left have reached common ground – just not in the way Liberals wanted.