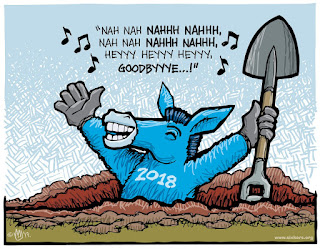 From DC's anarchist cartoonist, Mike Flugennock:
Last week, after having their asses handed to them on the healthcare bill, Democrats in the House Of Representatives inexplicably, gleefully burst into a chorus of "nah nah, hey hey, goodbye" in response.

This was claimed to have been a sarcastic response to indicate that Conservatives would lose their seats in next year's midterm elections because of their support of "Trumpcare", but it was just another example of the Democratic Party's arrogance, short-sightedness, selfishness, and utter political tone-deafness.
Posted by Mike Rhode at 10:04 PM