Here's some recent comics that we've received that aren't really for our audience, so we won't try to do an actual review. Several of these are reprints from England and won't be familiar to US audiences yet.  (Screen grabs, links and blurbs from Amazon but we don't take any money from them. Buy from your local store if you'd prefer) 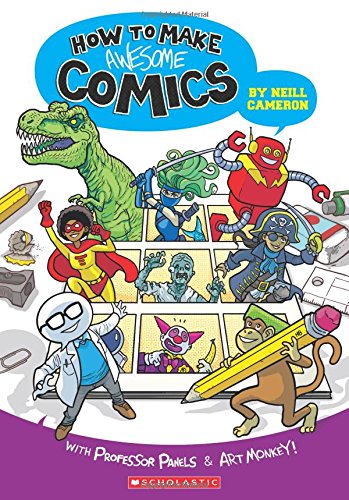 Scholastic Graphix
Want to have awesome ideas, every time? Feel like turning your ideas into amazing stories? And ever wish you could make your creations come alive with incredible artwork?

If any of these things sounded cool to you, then How to Make Awesome Comics is the perfect book to help you on your way to comics/cartooning genius. Let Professor Panels and Art Monkey take you through every step you'll need to be on your way!

From the very basics (coming up with your stories and characters, learning how to draw) to more advanced levels (making art and text work together well, what makes a good villain, creating your own books from paper), How to Make Awesome Comics is a comprehensive and can't-put-down guide for every burgeoning artist, all from the mind of accomplished comic book-maker Neill Cameron. 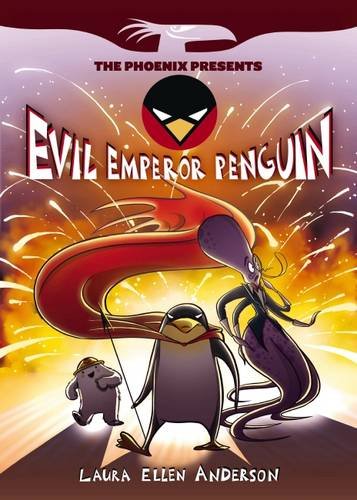 Scholastic Graphix
Far away in the icy wastes of Antarctica lives a warm and cuddly, kind-hearted penguin who only wants to do good in the world . . . NOT! This is no ordinary penguin. This is . . . EVIL EMPEROR PENGUIN! And he wants to take over the world!

Of course, every evil ruler needs a sidekick and a minion, and Evil Emperor Penguin is no different. That's why he has Number 8, a very polite and thoughtful octopus who knits, and Eugene, the incredibly cuddly abominable snowman who loves hugs.

Join this fearsome team of Evil as they try to take over the world--and obviously, destroy it--but get waylaid by evil cats, rogue farts, killer plants, and visiting sisters. 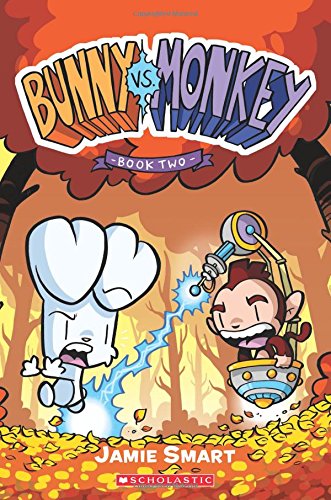 Scholastic Graphix
Welcome back to the woods! It's a peaceful home, really, but wait . . .

It's Monkey in a hovercraft that fires lasers! And is that a kitten cannon and a Hamster Mobile too?

Join Bunny, Monkey, Skunky, Pig, and all the rest of the lovable and crazy characters from the first book, as science and nature fight again. There's all the same irreverent humor, bold and appealing art, and non-stop action, but this time with robotic worms, Trojan mooses, and lemony doomsday devices, of course.

It's the continuing battle between good and evil . . . 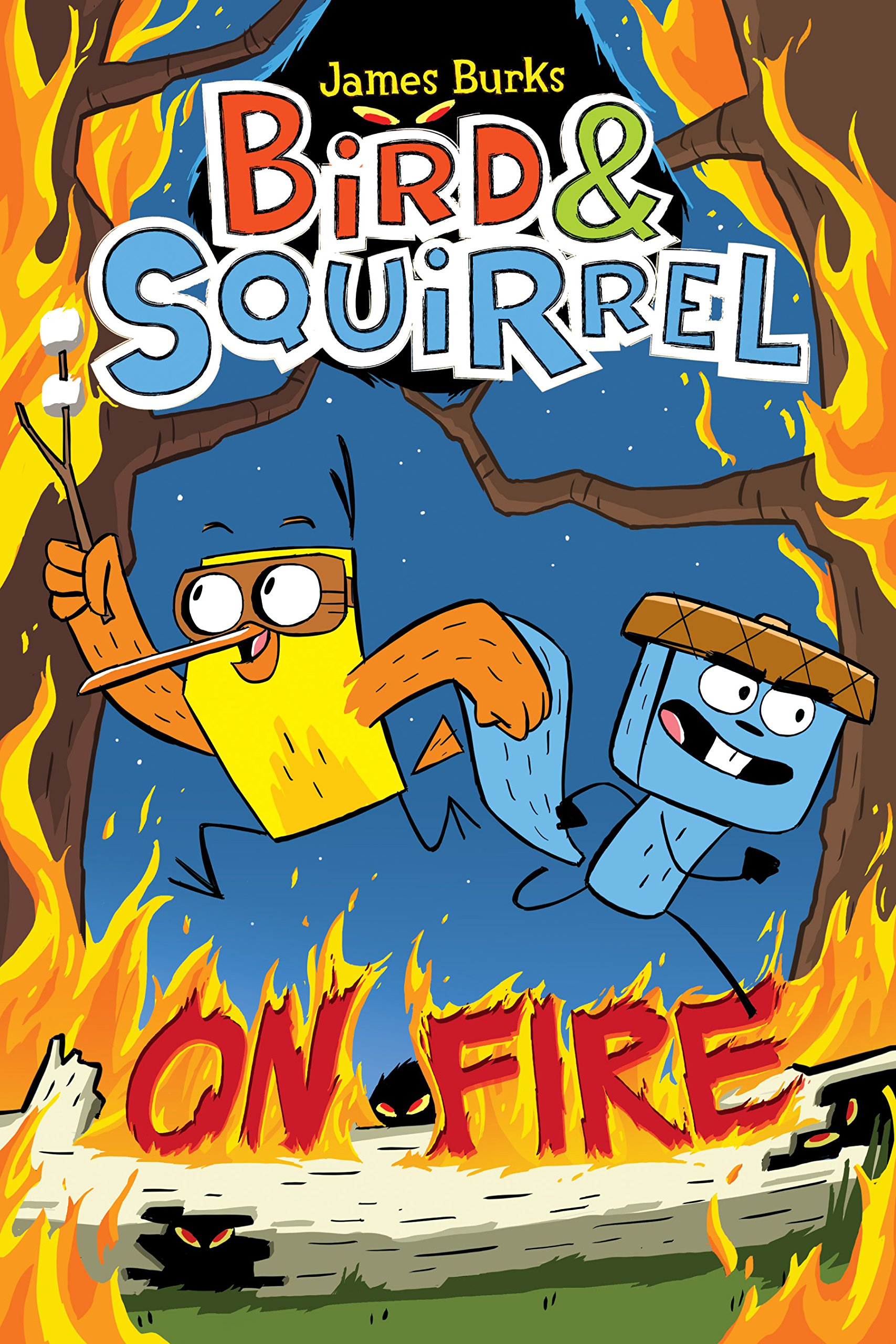 Scholastic Graphix
It's been a long, crazy trip around the world. Now the duo is back in their beloved forest, and Bird wants to throw a party! But Squirrel isn't in the mood to celebrate. His house needs a good cleaning, the river has been dammed up by a pesky beaver, and the forest animals are jittery about a growing menace. Will the dam dry out the forest? Will the mysterious new danger ruin the party? Will Bird finally convince Squirrel to let go and just have a good time? Find out in their hilarious new adventure! 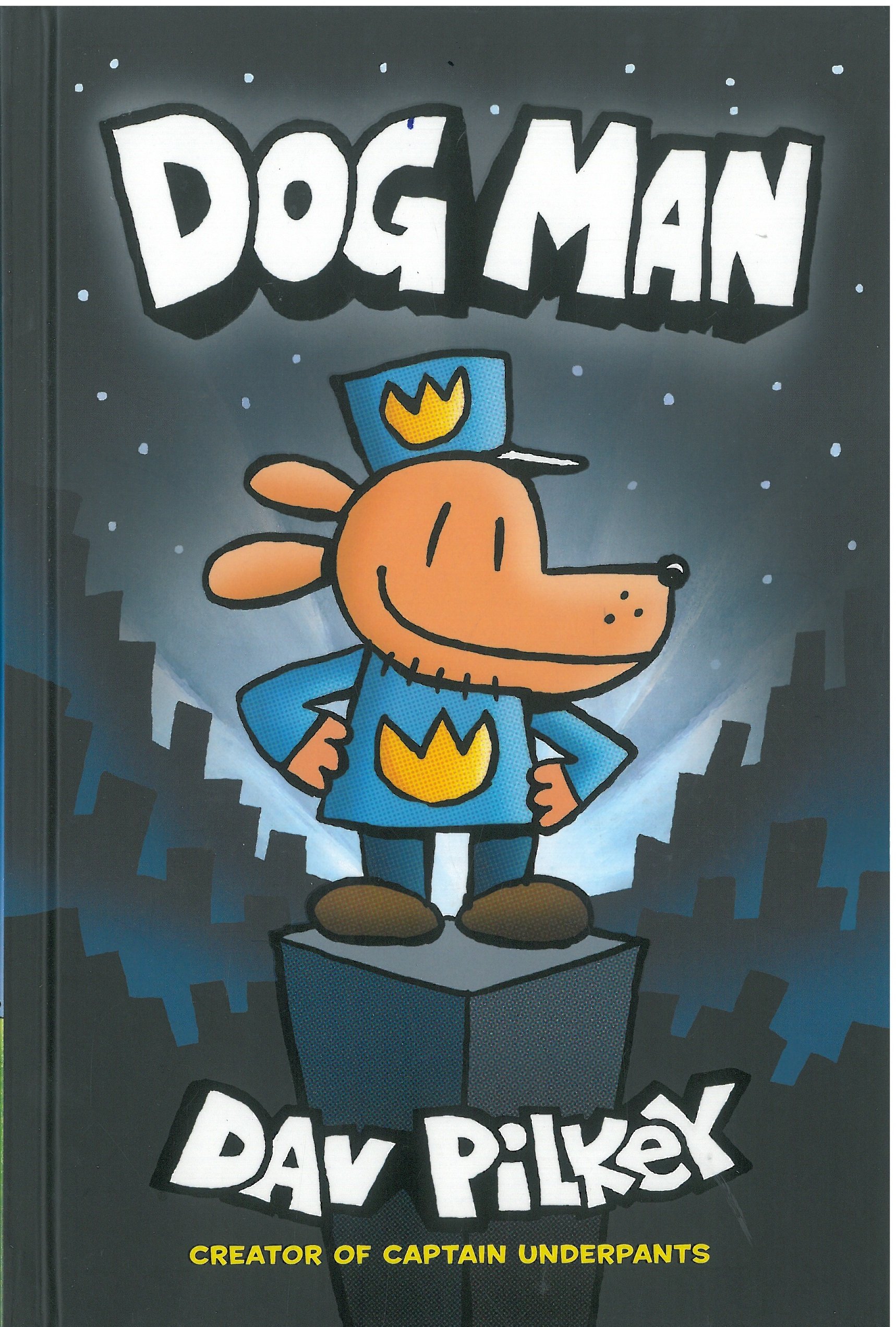 Scholastic Graphix
New from the creator of Captain Underpants, it's Dog Man, the #1 New York Times bestselling, crime-biting canine who is part dog, part man, and ALL HERO!

George and Harold have created a new hero who digs into deception, claws after crooks, and rolls over robbers. When Greg the police dog and his cop companion are injured on the job, a life-saving surgery changes the course of history, and Dog Man is born. With the head of a dog and the body of a human, this heroic hound has a real nose for justice. But can he resist the call of the wild to answer the call of duty? 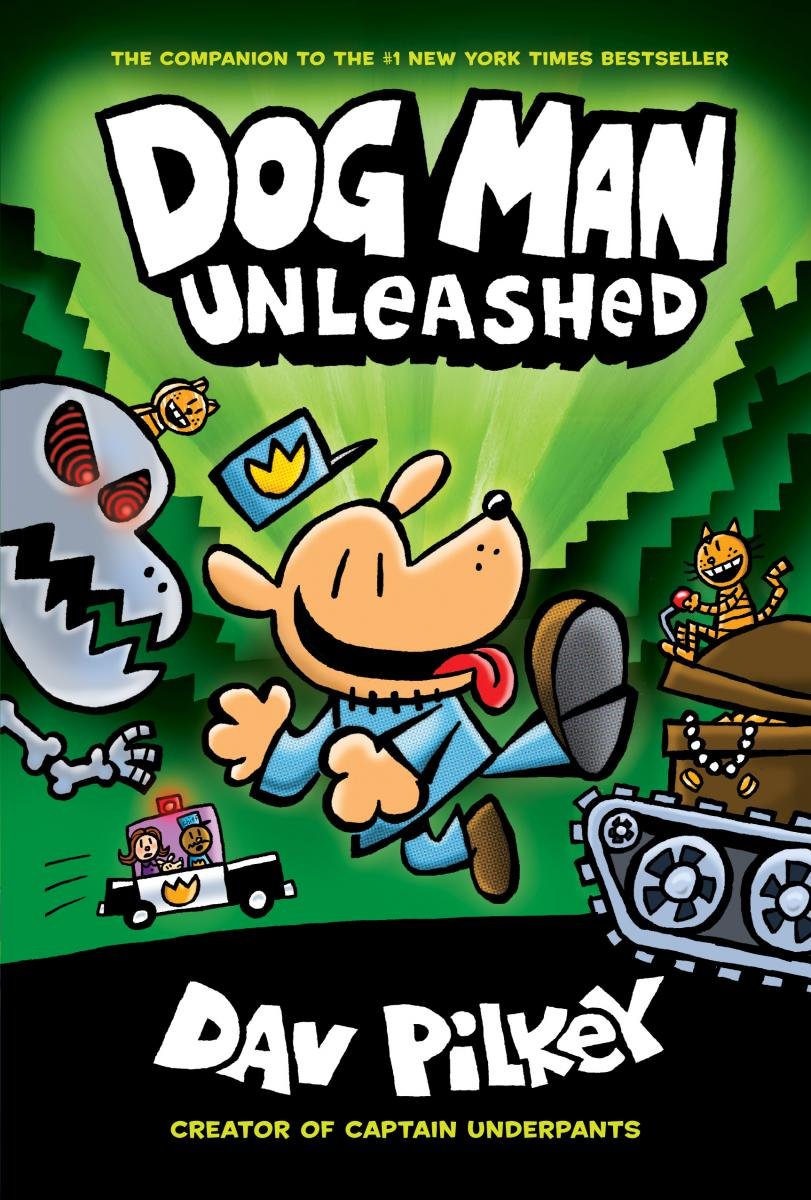 by Dav Pilkey
Scholastic Graphix
Dog Man, the newest hero from the creator of Captain Underpants, is still learning a few tricks of the trade. Petey the cat is out of the bag, and his criminal curiosity is taking the city by storm. Something fishy is going on! Can Dog Man unleash justice on this ruffian in time to save the city, or will Petey get away with the purr-fect crime? 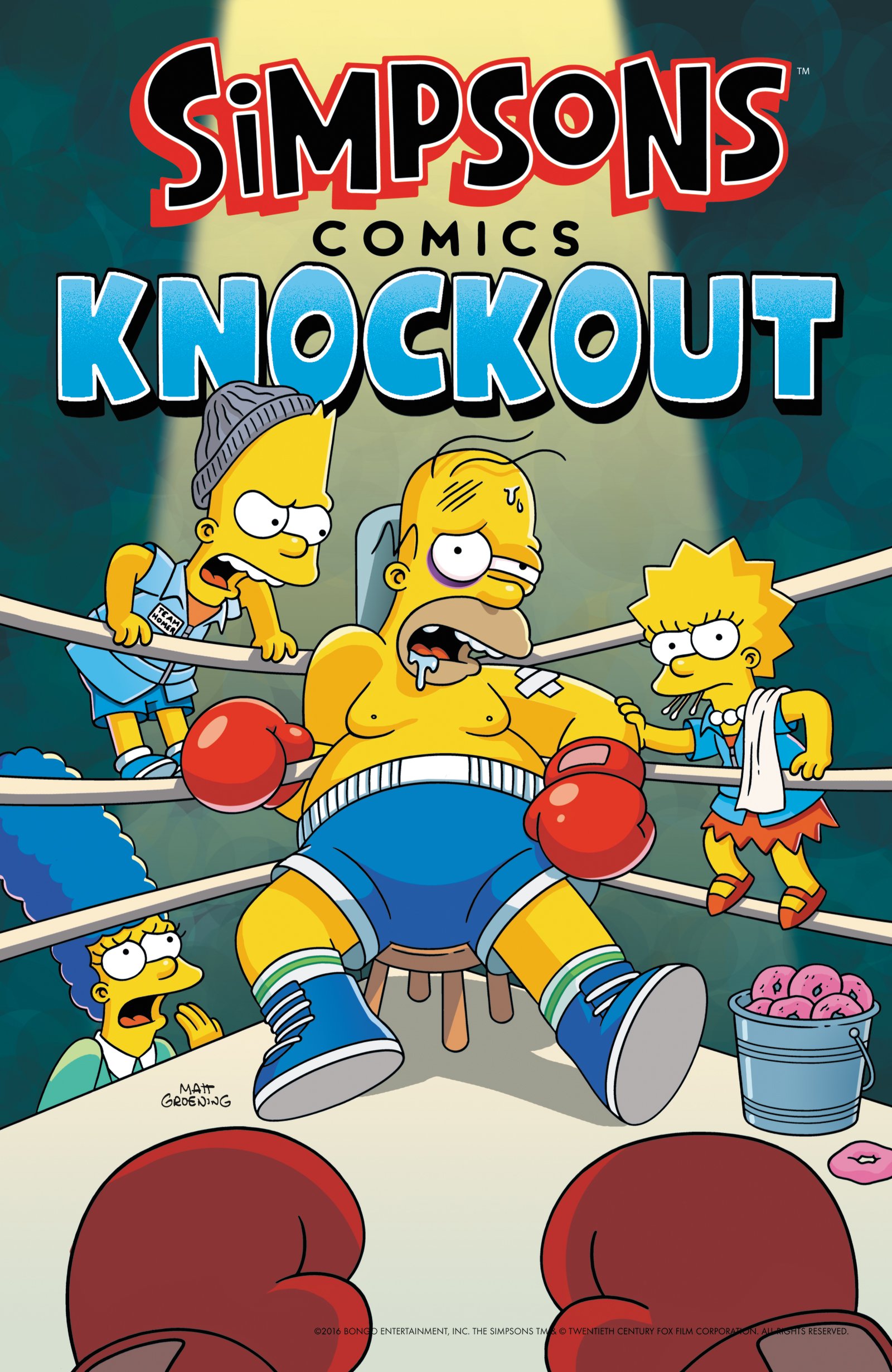 
It’s a unanimous decision! These pulse-pounding stories and more featuring Matt Groening’s beloved first family of fun, the Simpsons, will have you rolling with the punchlines!
Go the distance with the Simpson family as they join everybody’s favorite moonraking megalomaniac, Hank Scorpio. for a globetrotting adventure that will not only take you around the world but into orbit around the Earth. And when the lovelorn losers of Springfield feel like throwing in the towel on romance, they pick themselves up off the mat and get an adrenaline rush by living life to the extreme! And as if Homer wasn’t already a glutton for punishment, watch him discover his killer instinct as he goes toe to toe with C. Montgomery Burns! 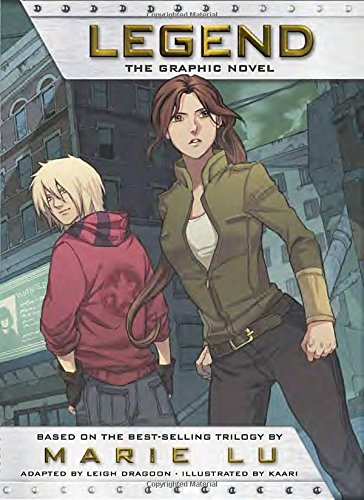 Born into an elite family in one of the Republic's wealthiest districts, fifteen-year-old June is a military prodigy. Born into the slums of the Republic’s Lake Sector, fifteen-year-old Day is the country’s most wanted criminal. But his motives are not as sinister as they often they seem. One day June’s brother is murdered and Day becomes the prime suspect. Now, Day is in a race for his family’s survival, while June tries desperately to avenge her brother’s death. And the two uncover the truth of what has really brought them together and the lengths their country will go to in order to keep its secrets. 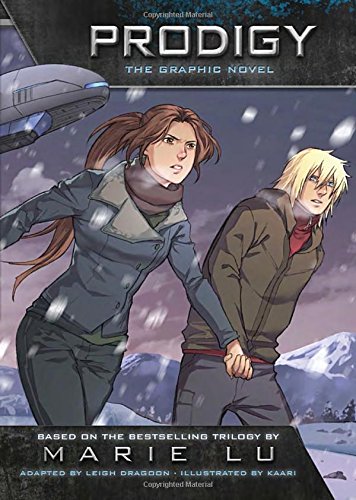 After escaping from the Republic's stronghold, Day and June are on the run in Vegas when the country learns that their Elector Primo has died and his son has stepped in to take his place. They meet up with the rebel stronghold of the Patriots—a large organization straddling the line between the Republic and its warring neighbor, the Colonies—and learn about an assassination plot against the Elector. Using threats and blackmail to get what he wants, the Patriots' leader, Razor, convinces June to let herself be captured by Republic soldiers so she can win over the Elector and feed him a decoy assassination plan. But when June realizes that the new Elector is nothing like his father, she must work with Day to try to stop the Patriots' plot before Razor can fulfill his own devastating plans. The second book in the best-selling Legend trilogy comes to life in this vibrant graphic novel adaptation.