Not a hoax. Not a joke. Not an April Fool's day trick. Here's an excerpt of the conversation of Richard Thompson and Bill Watterson from The Art of Richard Thompson, which you can buy right now from Amazon or Barnes & Noble, or order and wait for a copy signed by Richard from One More Page.

BILL WATTERSON: When I was a kid, I loved Peanuts, so I wanted to be the next Charles Schulz. I didn’t understand what that meant of course, but it seemed like a plan. You came to your comic strip from a different path,
however.

RICHARD THOMPSON: Yeah. Off in my own little world of being a pretend cartoonist. Without a plan.

BW: So how did you envision cartooning? What was your experience of it as a kid?

RT: Well, Schulz pretty much defined “cartoonist.” But I remember in fifth grade, a friend’s older sister had some Pogo books and we spent the day poring over them. That was the first time I understood some of the jokes. It was pretty intimidating and dense for a kid.

RT: Yeah, mostly strips. Comic books were hard to find. And a strip is a one-person deal. Not like animation, where you’ve got to work with other people.

BW: As a kid, animation just seemed out of the question to me. I wouldn’t even know how to go about doing it.

RT: It was interesting. But even when I was old enough to maybe try it, I always hated the idea of working with others.

BW: Plus, you needed film equipment and all that.

RT: Yeah. Really, though, I did cartoons without any clear thought of having a future in it.

BW: Any other strips or cartoons that had any impact as a kid? 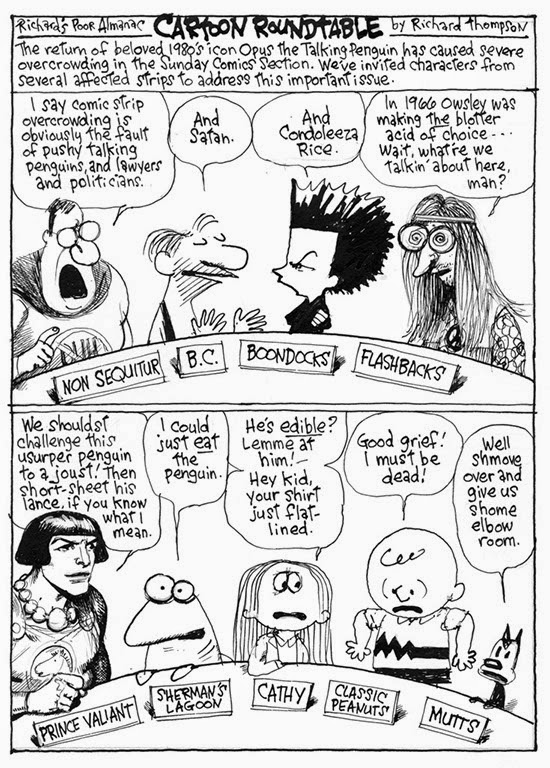 RT: Some strange ones. There was a panel called Mr. Tweedy about a hapless little guy. I don't remember who drew it. And there was Freddy by a guy who signed as Rupe. I think he was local.

BW: I don't know either one.

RT: I think it was probably in one paper. Also, Wizard of Id... BC... And Mad Magazine of course. I discovered that when I was probably ten.

BW: I remember there was some shock value in bringing Mad home.

RT: Right. (laughs) I remember the first time I picked it up in the grocery store and said I wanted to buy this. My parents looked at it and went ickkk. But my dad finally read it and started giggling. He had a good sense of humor, thankfully.

BW: My next-door neighbor bought it regularly, and he'd bring it over and I'd pore over the drawings. Eventually I worked up the nerve to ask my mom if I could get it. There were a number of years when I really thought Mad was the cat's pajamas, although now I think it was pretty formulaic. But even as a kid, it seemed out of the mainstream of cartooning. It was off in its own world.

RT: It seemed to open up this whole subculture.

BW: Could you imagine yourself doing something in that direction? 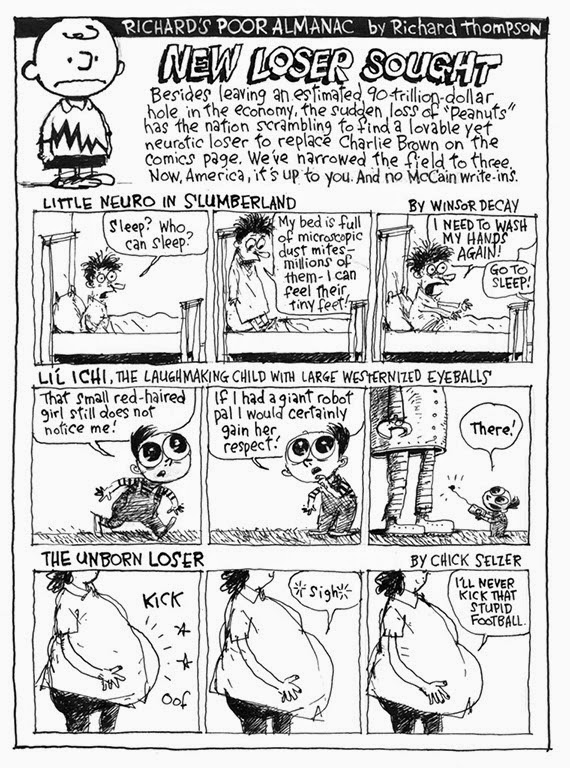 BW: I could never see a way in. I couldn't imagine myself drawing movie and TV satires. I guess Don Martin did the closest thing to a regular cartoon, but in that grotesque style. Or Dave Berg's whatever....

RT: The Lighter Side Of (laughs). I'd often read it first. It was always so square!

BW: Right! So what did you respond to in Mad? What aspect?

RT: Oh, the art. The Aragones drawings in the margins and stuff like that. There was no one thing. Spy vs Spy, which was kind of exotic. And of course the parodies, where you discover caricature.

BW: I marveled at Mort Drucker, but I didn't see any road between here and there. At that age, my drawing skills were pretty much limited to drawing things in side-view outlines.

RT: I would try, but... I do remember seeing David Levine drawings of Nixon in like, sixth grade, in my classroom. My teacher was an anti-Nixonite. These beautiful, elegant drawings of Nixon--I remember being fascinated by it. He was using ink like paint, almost.

BW: What, the hatching?

BW: I never really responded to Levine. The likenesses were strong, but sort of like stone sculpture, or something- -not warm. I dunno. I remember Oliphant's caricatures really impressed me--so wild and cartoony, compared to Drucker. But getting a likeness is really hard. What made you want to do that?

RT: Caricature was something that'd always interested me. Later, as a freelancer, I thought the more arrows in my quiver the better. When I showed the art director at the Post, Mike Keegan, some pages of caricature sketches, he was delighted. I was suddenly taken more seriously too. I remember the British show Spitting Image had just premiered, and it gave me the kick I needed.

BW: Hm, I'm trying to think what else was in the air back then...

RT: I remember we had a bunch of New Yorker cartoon books in the classroom. This is like fifth or sixth grade. The teacher would bring them from home or something.

BW: OK, you moved in more sophisticated circles than I did! 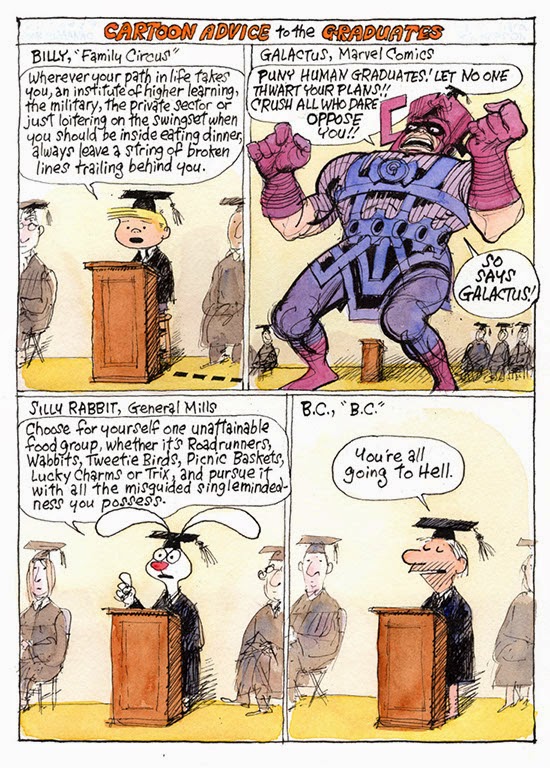 RT: I didn't quite understand them. There's a Roz Chast drawing about her as a child finding Charles Addams cartoons, and I remember finding those too, and how gruesome they were. And the painting in them was soft and..

BW: I was probably a bit older when I saw New Yorkers. You know, if it was a cartoon, I'd jump to read it, but I don't remember them making much impact. Well, actually, I still like George Booth a lot. He's one of the few New Yorker cartoonists whose drawings are funny.

RT: I remember being impressed with New Yorker cartoons, but I probably didn't understand much.

BW: How about comic books? Nothing?

RT: Some. They were hard to find. I'd find them occasionally, and then I'd probably whine 'til I got them. If they were Batmans.

BW: Really, they were hard to find? My town had three drugstores that used to carry them, and I'd get them sometimes, but superhero comics didn't do a lot for me.

RT: Archie and whatnot... I had a few of those but I was never really into them. 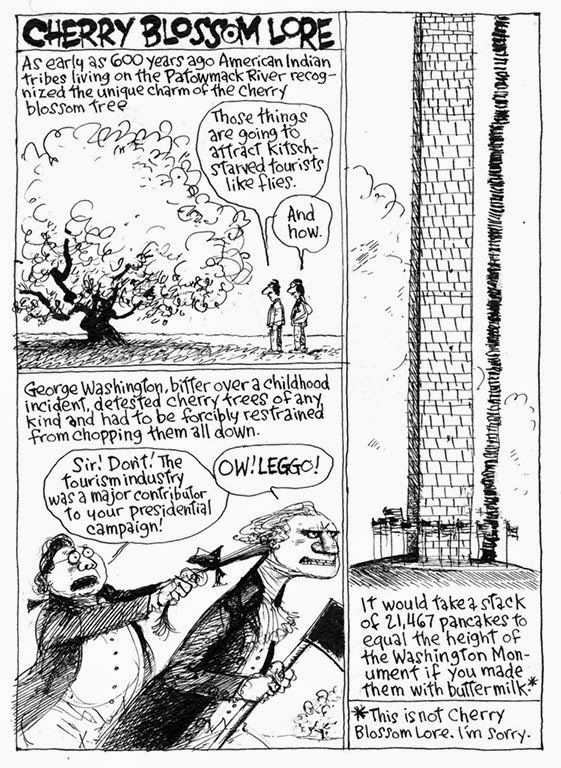 BW: One summer my neighbor gave me this huge box of Archie comic books, and I read them in the car on some family vacation. I have no idea where he got them, but there were a zillion of the things, so my brother and I sat in the back seat reading one after another until it nearly killed us. We read ten thousand Archie comic books and they were all exactly the same.

RT: And the drawings are so clean.

BW: Yeah, very slick. Even then I thought they were dumb and outdated. It's a bizarre memory. How about underground comix? Did they have any impact on you?

RT: Some. I came late to undergrounds. I had friends who collected them (Henry Allen has Zap #0) but my main exposure was all in histories and anthologies. I liked, revered Crumb, though he is overwhelming, and thought Wonder Warthog was freaking hilarious.

BW: I saw some in college and I liked Wonder Warthog too, but on the whole, the undergrounds didn't make much connection. I preferred sillier, more cartoony stuff, I suppose.

What non-cartoon things made an impression on you as a kid?

RT: My folks liked doing things and making me a part of it. I remember when the Mona Lisa came to town. I was about six. We stood in line for a long time. Red draperies and guards every few feet, and then  ventually, there it is. My mom liked it a lot. The whole way, she was telling me what an important painting it was and the story of it. She had a great appreciation for culture. She didn’t have any great understanding of it so much as just liked it, I guess.

BW: Wow, I guess you’re one of the few people who’s ever seen it without a foot of bulletproof glass in front of it.

RT: I think so. You couldn’t get right up to it--there were velvet ropes. But you could breathe the same air. (BW laughs)

BW: I don’t remember much exposure to fine art--just the popular culture of the day. I think of my childhood as the Batman TV show, the Beatles, and the moon landings. Although I do remember in middle school there were a few years when I read all the Doctor Dolittle books. I loved those--the idea of talking to animals. A PETA sensibility ahead of its time. It probably had some subliminal influence on my strip. What aspects of pop culture did you participate in?

RT: Well yes, the moon landings and take-offs. You knew it was important when the teacher pushed the TV into the classroom.