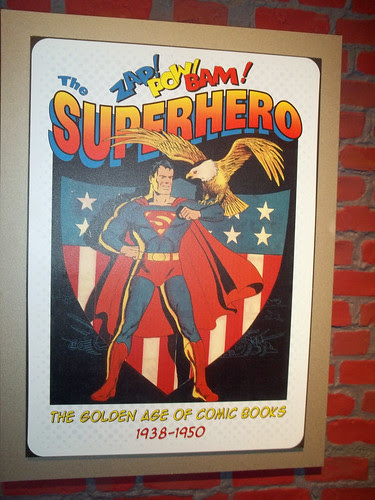 This past weekend I was able to attend the members' preview for the exhibit "ZAP! POW! BAM! The Superhero: The Golden Age of Comic Books, 1938-1950." The exhibit has arrived at the Jewish Museum of Maryland in downtown Baltimore and it's well-worth visiting.Curated by the late Jerry Robinson, this exhibit was put together in 2004 by the William Breman Jewish Heritage Museum in Atlanta, which published a catalogue of the same name.

Robinson had multiple careers in cartooning including writing a history of comics, being an editorial cartoonist, and starting a syndicate, but he began as a young man in comic books. As a seventeen-year old he began working on Batman as a letterer and inker in 1939. Eventually he became a penciller for the character, and as an employee of what became DC Comics, he met a lot of artists. And thankfully he saved examples of their work, at a time when that behavior wasn't very common.

And many of the writers and artists were Jewish. As comics historian Arnold Blumberg noted in his remarks at the preview, "...it's a joy to see the exhibit come to a facility like this and to take a look at it from our unique perspective of what our culture, what our heritage, has given not just to itself, but to the world. The world owns Superman and Batman and all these characters now. Many of them may not have a clue where they came from, who were the kind of people who sat down and created them, but they are now owned by the entire world. They're heroes for everybody and they came from us."

The exhibit gives a basic history of comic books and characters and biographies of the creators, interspersed with now-priceless art and comic books. Particular attention is paid to World War II of course. Pages of an original Batman script by Bill Finger can be seen - Robinson's estate donated other examples of these to Columbia University this month. Historic highlights include Robinson's artwork for early Batman covers, his original Joker playing card sketch, and a Siegel & Shuster drawing of Superman dedicated to Robinson. A few cases examine the merchandising of Captain Marvel (aka Shazam) and Superman.

This version of the exhibit does have a tricky dichotomy to it. The uncolored, unfinished single pages of comic book artwork will appeal to a mature (elderly, if they bought the titles originally) viewer, while the idea of a superhero largely is aimed at male teens and younger children. This version of the exhibit caters to the very youngest viewers, with a set of tables, chairs and supplies for making cartoons, a replica of Superman's telephone booth with costumes set alongside it, a Batmobile kiddy ride, a newsstand with comics to read on it, and a piece of "Kryptonite"with a recording that warns one not to get to close. 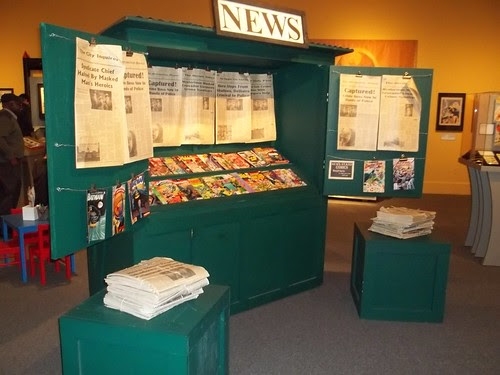 I was fortunate to be able to visit the exhibit with local cartoonists. Barbara Dale (of Baltimore), known for her humorous cartoons, fixated on the original Spirit page by Will Eisner and the Frank Frazetta that was next to it, and thought those two pieces made the entire exhibit worthwhile.

Rafer Roberts (of Fredericksburg) pointed out several things to me - Moldoff's use of gouache to give white highlights on the legs of a monster on Moon Girl #4's cover for EC Comics, Bernie Wrightson's debt to Lou Fine (look at the skeletonized figure on the Hit Comics cover, and Bob Fujitane's use of the traditional iconography of Japanese monsters.

I had seen a previous version of this exhibit in New York at the Jewish Museum there, but it was reworked as an addition to the massive "Masters of American Comics" show. Any fan of comic book history should take the opportunity to see this version of the show at the Jewish Museum of Maryland. The catalogue can be bought in the gift shop, along with Superman toothbrushes, Batman lunchboxes and hand-painted superhero yarmelkes. The Museum has produced two curriculum guides for schools and plans lectures throughout the exhibit which runs from January 27 - August 28, 2013, and costs $8 or less. More of my pictures can be seen here.
Posted by Mike Rhode at 10:42 PM

Thanks for this review, Mike. I saw this show at the Skirball Center in Los Angeles, and was delighted. One question: do you think some of the "original" pages on view were actually high-quality scans/giclee prints/some sorts of reproduction, rather than originals? When I looked closely at some of the pages on view in L.A., I had the impression that they were precise reproductions of the original art boards rather than the boards themselves. That doesn't lessen the exhibit's educational value and visual appeal, of course.

Charles, I had not noticed that, but will try to see it again and check. There was one definite repro - the Mac Raboy piece, but I thought that was a proof stat, probably made in the 40s and picked up then.