Meelee at Malaysia, by Joe Sutliff

"Representatives of Amnesty International, Cartoonists Rights Network International (CRNI) and the AAEC joined Malaysian cartoonist Zunar for a demonstration in front of the Malaysian Embassy in Northeast Washington on Wednesday evening. The protest was to draw attention to a lack of freedom of the press in Malaysia. Mr. Zunar is in Washington DC to receive an award from the AAEC for courage in political cartooning. Representatives of the embassy came out and spoke with Zunar for a few minutes through the embassy gate. Extra police were on hand, but the protest remained peaceful." 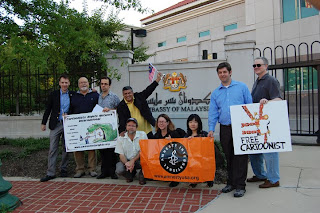 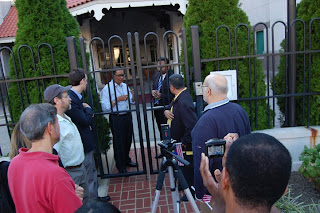