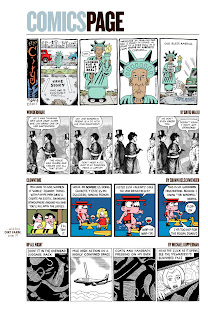 
With its March 11 issue, Washington City Paper debuts a comics page, once again making funnies a significant part of the paper’s editorial mix.

The new line up will include two long-time contributors to City Paper, Derf and Shawn Belschwender with The City and Clowntime respectively and two strips new to City Paper readers: Up All Night by Michael Kupperman and Wondermark by David Malki.

“We’re thrilled to have comics back,” says creative director Jandos Rothstein “I know a lot of our readers missed them—and we did too, especially Ad Director David Walker who really rallied for the page when we were planning our redesign. It felt especially good to get Derf’s The City back in the paper—it ran for nearly 20 years before the cuts, and we’d used Derf as an illustrator—it really felt like his work was part of who we were visually and editorially.”

The paper had stopped running comics in 2008 as part of a cost cutting move. “When the paper was purchased by Creative Loafing, they were asking for cuts, and it was a visible thing we could do” says City Paper publisher Amy Austin “but they’re really not that expensive, and it’s a nice bonus for our readers.”

Editor Michael Schaffer adds, “we’ve spent a lot of time thinking about the various platforms we publish on. City Paper does so much vital stuff online, and we’re taking on more and more ambitious projects there, but part of the print redesign involves embracing those things where paper still offers a unique advantage--like with a beautifully designed narrative feature story, or with comics.”

“The comics page is really part of an overarching effort to meet the needs of different kinds of readers that is manifest across our just-launched redesign,” says Rothstein. “While we continue to provide the sort of long-form, serious journalism Washington City Paper is famous for, we are also serving grazers and commuters with shorter features, more graphics-dominated items, and what we’ve been calling ‘toppers,’ which are little news bites that appear above longer pieces. I don’t think anything we’ve done changes our fundamental relationship with our readers, but I think we have created a paper that serves those readers in new ways and in new places.”

It’s still early, but community reaction to the return of comics has been positive in the community, with a lot of positive comments about the new line up on the ComicsDC blog.
Posted by Mike Rhode at 7:15 PM