Bill Day on Herblock and his tribute cartoon 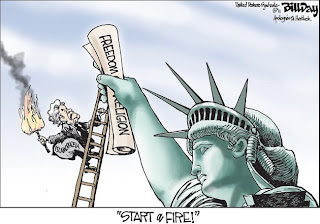 A guest post by the excellent cartoonist Bill Day on the great Herblock, after I saw yesterday's cartoon online and asked him about it...

Discovering Herblock is a transcendent moment in my early awareness as both a cartoonist and a young southerner coming of age in the segregated South. At around 8 or 9 years old in the late 50's, I became very aware of the inequality of my region, trying to comprehend why America would talk about freedom and then not allow it. The water fountains, the separate entrances, the back of buses, the separate schools, and the unpaved roads in 'Goldboro', the black section of town. I saw all of that clearly and looked for understanding from my parents, who while loving and kind, failed it support my opinions. There seemed to be no one who would support me.

I was beginning to really like cartooning and found a Herblock cartoon as an example of 'editorial cartoons' in the World Book Encyclopedia. It was "Fire!" It was the first editorial cartoon I had ever seen and it opened up my world. I started looking for them in newspapers in my home town library where there were many out of state newspapers. There I discovered Mauldin, Haynie, Conrad,  and many others. As the civil rights movement started to shake the foundation of the deep south, I would go to the library and see what these cartoon heroes of mine would draw to explain the events unfolding. Herblock was my very favorite and I followed him closely. My interest in the newspaper section at the library began to be noticed by the chief librarian. I was about 12 years old by then and it was unusual for a boy my age to be spending so much time there. I was also naive about her interest in me. One day she came over and asked what had my intense interest. I gladly showed her the Herblock cartoon and spoke so admiringly about him. She was not happy about it.

Several weeks later I went to the library to catch up on my cartoon education. I looked everywhere for the Washington Post, but I couldn't find it anywhere. I went up to the counter and asked where it might be and the librarian told me that the subscription had been canceled. I asked why, and she told me that she was not going to have the youth of her town corrupted by such Communist propaganda! I was absolutely crushed.

Of course, it was too late. I was already corrupted by the education I had learned from Herb, and her action only reinforced my understanding of the events rocking the South. The door had been opened.

In 1974 I made a trip to Washington and met Herb. He was so wonderful to me. The nicest, sweetest guy I have ever met. We stayed in touch for years after that. Herb would send me clippings of the cartoons he saw of mine when they popped up in Newsweek or the New York Times. It was always a thrill to get a letter from him. He was following me as I had followed him for all those years. It hurt so much when Herb died and I was depressed about it for a very long time. I loved him.

I debated with myself about whether to do a 'takeoff' of Herb's famous cartoon. I finally decided that Herb would have liked it, since he was a dear friend of mine. I reversed the water bucket with the fire, making it different enough. I hope Herb is smiling now. He is such a hero to me. -- Bill Day
Posted by Mike Rhode at 7:02 PM

This one came in via email -

What an engrossing, wonderful article. Bill Day provided some profound insights on local attitudes during this period of adjustment. Thankfully, there were many others in the region who did not adhere to that librarian's point of view. In any case, I have always admired Bill's cartoons over the years, and only wish I had made more of an effort to get to know him better, rather than just a nodding acquaintance. I appreciate his sharing this personal slice of history.
-Steve Artley