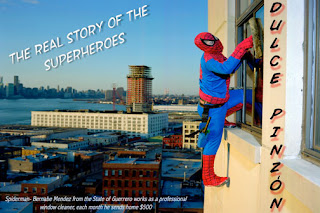 I've submitted this for the spring issue of the International Journal of Comic Art, but will share it with my readers here first.

Photographer Dulce Pinzón clothed Mexicans working in in Halloween superhero costumes loosely related to their jobs, and photographed them doing that work. Thirteen large images were displayed. Pinzón’s biographical data sheet noted, “As a young Mexican artist living in the , Dulce soon found new inspiration for her photography in feelings of nostalgia, questions of identity, and political and cultural frustrations. … ‘The Real Story of the Superheroes’ comes full circle to introduce the Mexican immigrant in New York in a satirical documentary style featuring ordinary men and women in their work environment donning superhero garb, thus raising questions of both our definition of heroism and our ignorance of and indifference to the workforce that fuels our ever-consuming economy.” While one should generally read press release material with ones critical faculties engaged, I actually agree strongly with the second sentence. The images do not quite stand by themselves, but with captions that explain whom the people and what their occupations are, one is easily led to musing about socio-economics and superheroes.

Some photographs were disturbing: an image of a young man in a Robin costume standing at night on a city street illuminated by a peepshow sign and a police car is labeled, “Robin. Ernesto Mendez from works as a male prostitute in . He sends 200 dollars a week.” Other images are less disturbing, but still thought-provoking. “Elasticman [actually Mr. Fantastic of the Fantastic Four – ed.]. Sergio Garcia from the State of works as a waiter in . He sends 350 a week.” The photograph shows him in costume reaching across a diner to present a plate to a seated woman. A cook is shown as the Human Torch, Batman is a taxi driver, Spider-man is a professional window cleaner, Acuaman (sic, Aquaman) works in a fishmarket and the Hulk loads trucks for a greengrocer.

Pinzón had a clever conceit, took thoughtful photographs and the exhibit was well worth seeing. The images were for sale in several sizes and prices ranging from US$1250-$2500. 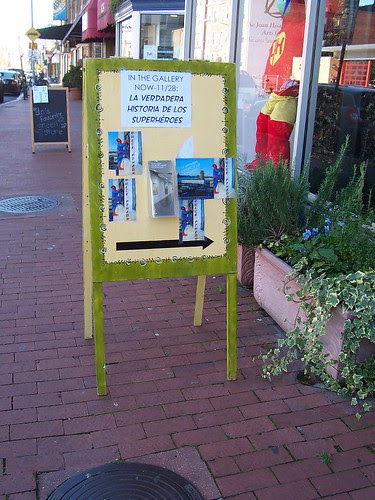 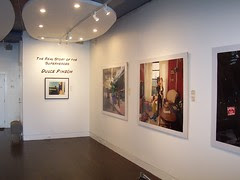 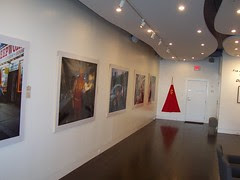 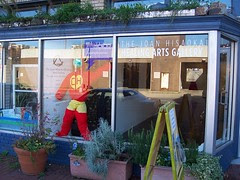 Email ThisBlogThis!Share to TwitterShare to FacebookShare to Pinterest
Labels: Dulce Pinzon, exhibit, photographs, The Real Story of the Superheroes