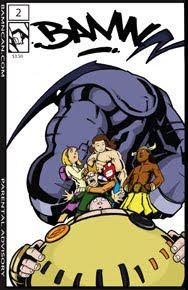 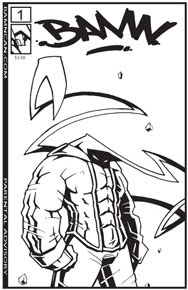 For the uninitiated, Indy Comic Book Week is not the day that America invades Afghan stand-up comedians, nor is it the day that Harrison Ford tells dead baby jokes --- no, Indy Comic Book Week is the last week of December (12/30/09), in which, independent comic book creators around the known universe receive an opportunity to pimp their illustrated works to your local comic shop (in some cases for the first time).

Get on board, learn something new, support your local hipster, and give back to the only printed media not on its' deathbed: http://www.indycomicbookweek.com/

All kidding aside, ICBW is a great opportunity to take advantage of what the comic industry has to offer besides the usual superhero stuff. Not to mention the fact that Bamn #2 will finally be making its' comic shop debut at, both, Third Eye Comics and Alliance Comics and Games on December 30th 2009. If you're in DC, Maryland, or Virginia, be sure to grab a copy.

Be sure to snag these titles from The Bamn Crew on this exciting day (and if your retailer doesn't carry them…ASK FOR THEM!):

Nerds vs. Jocks, Bullies vs. Misfits, the Weak vs. the Strong...Everyone loves a good underdog story, SO LETS GET READY TO RUMBLE! BAMN gets its title from the embittered main character. A surly and washed-up former pro wrestler, Bamn has spent the dying years of his career throwing up in bars. He lives out of his car and uses stolen credit cards to pay for beer. A chance encounter with a pair of local high schoolers, Art and Ian, brings him to the FWF, A backyard wrestling federation ran by the two young fans. When the school's wrestling squad shows up to bully the kids, Bamn steps in. In a rare moment of clarity he promises all the teenagers that he's going to teach them the most important thing they will ever learn…HOW TO FIGHT BACK AND LOOK GOOD DOING IT!

Also Available for purchase at http://www.comixpress.com

Bamn, a fallen pro wrestling superstar, has spent the postscript of his career throwing up in bars and living out of his car.
A chance encounter brings Bamn to a group of teenage fans who have long-idolized the has-been wrestler. Wanting to impress Bamn, the kids invite him to their backyard wrestling show. Unfortunately, the only audience they attract is the group of bullies that comprise their school s amateur wrestling team. Bamn arrives to end a confrontation between the kids and offers to teach the backyarders how to fight back.
Training day has begun...
24PGS.(each)/Black & White/Parental Advisory …$3.50 (each)
www.bamncan.com

Also Available for purchase at http://www.comixpress.com