"The Adventures of Carrie Giver" comic book distributed to Congress 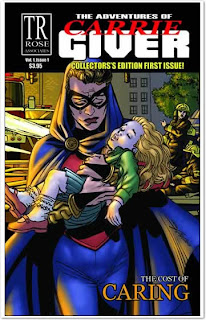 The Examiner's political gossip column by Jeff Dufour and Patrick Gavin reports today that the comic book "The Adventures of Carrie Giver" was distributed on Capitol Hill recently. The comic book deals with the cost to people, mainly women, who become primary care givers to disabled family members. And it has a cover by Neal Adams! You can buy a copy through that link, by the way.

The columnists talked to the group, and reported, "So which politicians like their proposals in comic book form? Social Agenda’s Theresa Funicello tells us the best responses she’s received from Capitol Hill came from the offices of Sen. Chuck Schumer, D-N.Y., Sen. Mary Landrieu, D-La., and Rep. Marcy Kaptur, D-Ohio. In addition, Funicello says the real women’s division of the Department of Labor enjoyed the comic and asked for several copies. “Staffers were very amused and kind of stunned when we came around with these,” said Funicello. “They don’t usually get serious issues in comic book form.”"

Roll Call had the story too, but doesn't provide a free online version. The print version is "Adventures in Lobbying: Comic Books Help Put Caregiver Issues in the Spotlight" By Tom Gottlieb, Roll Call Staff, January 23, 2007.
Posted by Mike Rhode at 9:24 PM