Oct 25-26 The Cartoon Medicine Show: Animated Cartoons from the Collection of the National Library of Medicine 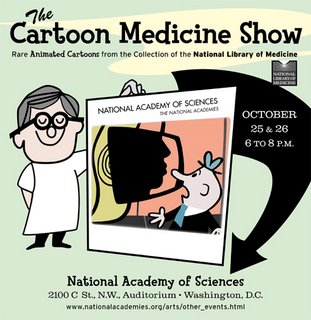 This press release arrived a little while ago. This should be great fun - Mike Sappol's a very sharp historian of medicine, as is David Cantor. Donald Crafton's book is a must-have for anyone interested in the history of animation.

DETAILS:
From the silent film era to the present, physicians, health professionals, government agencies like the U.S. Public Health Service, and voluntary associations such as the American Cancer Society, have used motion pictures to advance medical science, train doctors and nurses, and educate the public.

"The Cartoon Medicine Show: Animated Cartoons from the Collection of the National Library of Medicine," curated by Michael Sappol of the National Library of Medicine, will feature a rich sampling of rarely screened animated medical cartoons from the 1920s to the 1960s. The film series will present a variety of medical themes and genres, including dental hygiene, physical fitness, physiology, mental health, malaria, venereal disease, cancer, radiology, and sanitary food preparation. Each evening will consist of a different selection of 10 to 15 short animated medical cartoons by animators both obscure and well-known, including Walt Disney, Friz Freleng, Zack Schwartz, Walter Lantz, and Shamus Culhane.

SPEAKERS:
Film historian Donald Crafton and medical historians Michael Sappol and David Cantor will provide commentary. Donald Crafton is the chair of the department of film, television, and theater at the University of Notre Dame. He is the author of Before Mickey: The Animated Film, 1898- 1928 (MIT Press, 1984). Michael Sappol is a curator and historian at the National Library of Medicine. His scholarly work focuses on the body, anatomy, medical illustration, and medicine in film. He is the author of A Traffic of Dead Bodies (Princeton University Press, 2002). David Cantor is the editor of Reinventing Hippocrates (Ashgate, 2002). His scholarly work focuses on the history of 20th century medicine, most recently the history of cancer.

EVENT: The Cartoon Medicine Show: Animated Cartoons from the Collection of the National Library of Medicine
DATE: October 25 and 26
TIME: 6 p.m. to 8 p.m.
LOCATION: National Academy of Sciences Auditorium, 2100 C St., N.W., Washington, D.C.
COST: Admission is free, but seating is limited
RSVP: arts@nas.edu or (202) 334-2436
METRO: Foggy Bottom on the blue and orange lines
Posted by Mike Rhode at 12:55 PM