The annual Cartoons and Cocktails charity auction was last night. I bought some art, and was a B-list local celebrity auctioneer with A-List cartoonist Matt Wuerker. 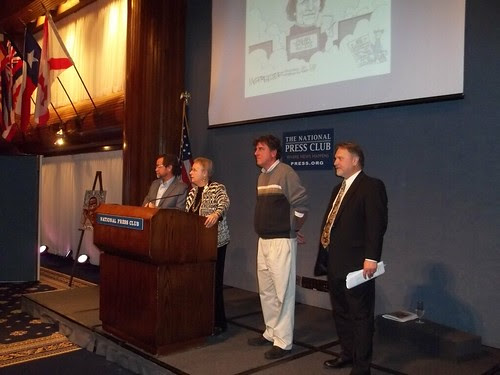 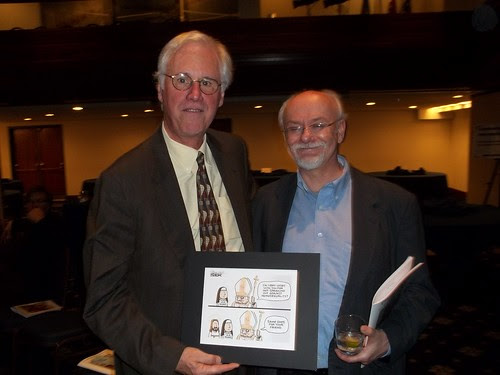 You'll have to go to Ohio's Billy Ireland Cartoon Library & Museum to see a good collection of catalogs from previous years. I've given them the 2012 and 2013 catalogs which haven't been cataloged yet of course. 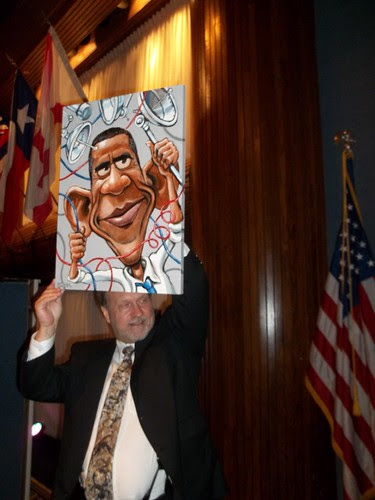 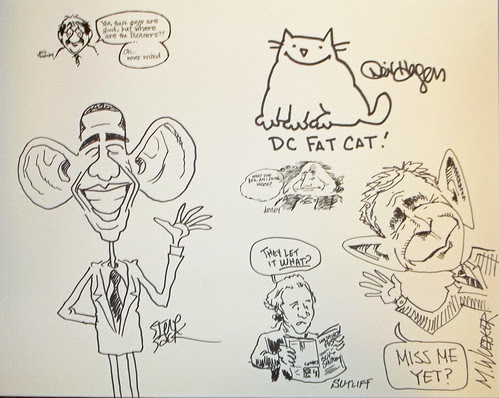 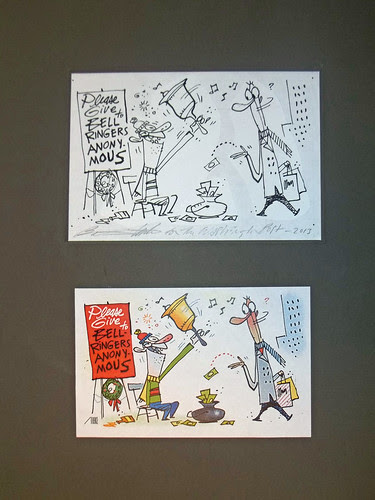 Posted by Mike Rhode at 7:38 PM No comments: Links to this post

Unfortunately, today was the first I'd heard of it.

Posted by Mike Rhode at 9:46 PM No comments: Links to this post 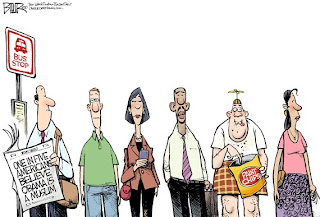 Steve Artley went to Cartoons & Cocktails last night and tells us, "Nate Beeler stole the show with one of his toons auctioning for 2100 buckeroos. That is a record for the C&C event. Actually, yours truly held the record for a few years at $1750, but am happy to pass the baton to the next generation of political renderers."

Nate says the cartoon that sold is his September 1st one, pictured above. You can see all his cartoons at the Washington Examiner site, which even though I'm a friend of his and opposed to the Examiner's political stance, I must say are excellent.
Posted by Mike Rhode at 4:06 PM No comments: Links to this post

Kevin 'KAL' Kallagher, Baltimore's crack editorial cartoonist, will be on the Kojo Nnamdi Show at 1 pm discussing political satire. I believe he also will be appearing at Cartoons & Cocktails tomorrow evening. I'm now thinking I really should have accepted that invitation to go....
Posted by Mike Rhode at 11:04 PM No comments: Links to this post

Michael Cavna got an interview with Mark Fiore up before his talk at Georgetown University tonight. I attended the talk and enjoyed it. I'll try to post some highlights tomorrow before Fiore attends the Cartoons & Cocktails auction, where as you'd expect, if you attend you can bid on editorial cartoons. Mark's also got some DVD collections of his animation for sale, if you ask him.
Posted by Mike Rhode at 10:54 PM No comments: Links to this post

The annual auction of editorial cartoons at Cartoons & Cocktails is coming on October 28th. Tickets are on sale now.
Posted by Mike Rhode at 9:38 PM No comments: Links to this post

Email ThisBlogThis!Share to TwitterShare to FacebookShare to Pinterest
Labels: Cartoons and Cocktails

With so much news this year, we have a bumper crop of editorial cartoons for the 21st Annual Cartoons & Cocktails, the nation’s top cartoon auction. Come bid on your favorites and meet many of the cartoonists who will be drawing live for our special Art-In-Action feature.

Auctioneers include Michael Phelps of The Washington Examiner (our media sponsor), Bob Edwards of XM Radio and NPR, Sari Horwitz of the Washington Post, Harry Jaffee of Washingtonian Magazine, Derek McGinty of WUSA-TV 9 and Mike McCurry of Public Strategies.

Cartoons & Cocktails is a major fundraiser for three great causes:

* Young D.C., the independent newspaper by and for teenagers from the District of Columbia, Maryland and Virginia, and its First Amendment programs.
* Cartoonists Rights Network International, which assists editorial cartoonists around the world who are persecuted because of their commentaries.
* The Eric Friedheim Library at the National Press Club, its awards and scholarship programs.

Tickets are $50 each and include drinks and hors d’oeurves
Can’t attend? Choose your cartoons (after Oct. 18) and bid at
www.cartoonsandcocktails.org.

Purchase your tickets through the National Press Club. Call 202-662-7501.
Charged tickets can be picked up Oct. 23 at the Cartoons & Cocktail will-call desk.
Posted by Mike Rhode at 10:07 PM No comments: Links to this post

Cartoons and Cocktails event being advertised 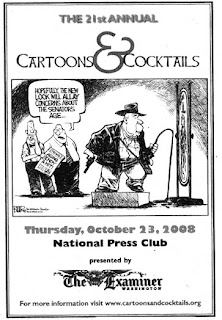 This is from yesterday's Examiner. Note Nate Beeler's artwork - I guess he donated it for auction. He doesn't usually part with it, so this might be rare.
Posted by Mike Rhode at 7:34 PM No comments: Links to this post

Nobody invited me as their date, so this is the first I've seen of this. Good work, Nate! Anybody who was there (Nate?) want to post a few details? The menu? Risque stories?
Posted by Mike Rhode at 8:55 PM 1 comment: Links to this post