I grew up in the tail end of the life of the sports cartoon. Bill Gallo was still at the NY Daily News, and the local Bergen Record had a sports cartoonist. By now, the field is mostly gone, but as Eddie Campbell has written about it, in its heyday, it launched the careers of many a cartoonist.

This past weekend I found an original sports cartoon and a pritnted comic strip at an estate sale.

The original cartoon is by Christy Walsh, a failed sports cartoonist. However, Michael Cavna, of the Washington Post, used to be a sports cartoonist himself and he put me on the track of finding out Walsh was the Kevin Bacon of his day and knew everybody. He might have not been a great cartoonist, but he became a fantastic sports agent and syndicator and became a rich man, representing Babe Ruth and others. (UPDATE 5/26/2021: I gave this to the Library of Congress' Prints & Photos division)

Comics historian Steven Rowe tells me "Blue is wearing a cap with what seems to be the letter D.
Since Lu Blue played first base for Detroit in 1923, Blue is indeed likely to be Lu Blue."

The other item is a clipping of a comic strip about the World's Series in baseball by Morris Scott from the Boston Post, October 8, 1913. The New York Giants are facing the Philadelphia Athletics.* I've cleaned the image up; the original is perfectly legible, but yellowed from being displayed for years. 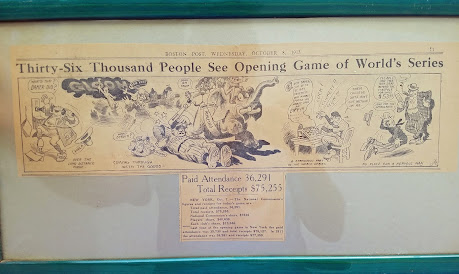 Two crack comics historians helped out with tracking this bit of history. Rodrigo Baeza provided me with the artist identification, and Art Lortie found a couple of the articles that Rodrigo suggested from Newspaper.com. Here's 3 items about Morris Scott, who appears to have died rather young, as well as another comic strip from 1918.

*Rod Beck sent in the following bit of baseball history - "Frank Baker (shown on the back of the elephant) was known as Home Run Baker. The year 1913 was in what is called The Dead Ball Era. Baker led the American League in home runs from 1911 thru 1914 with 11,12,10 and 9 homers respectively. The Philadelphia Athletics beat the New York Giants 4 games to 1 to win the 1913 series."