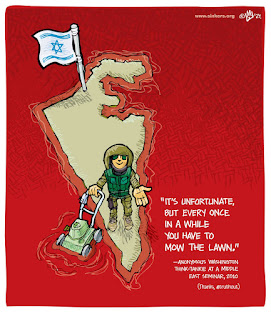 So, the other day I'm doomscrolling the news from Gaza, and I stumbled over this 8 year-old Truthout article that somebody dug up and tweeted. The callousness of Washington foreign-policy think tanks — and the Israeli general public — is perversely spectacular:

"Israeli hardliners joke about the periodic need to decimate each new generation of Palestinian militants as "mowing the grass," a process underway
again in new bombardments of Gaza. This ugly metaphor has also penetrated the think-tank world of Official Washington, as ex-CIA analyst Elizabeth Murray learned:

In early 2010, one of Washington DC's most prestigious think
tanks was holding a seminar on the Middle East which included a discussion of Israel's December 2008- January 2009 assault on Gaza which killed about 1,300 Palestinians. When the death toll  was mentioned, one expert on the panel smiled enigmatically and intoned: 'It's unfortunate, but every once in a while you have to mow the lawn'."

Mike Flugennock, Political Cartoons: http://www.sinkers.org/stage
and follow me on Mastodon at https://mastodon.social/@flugennock