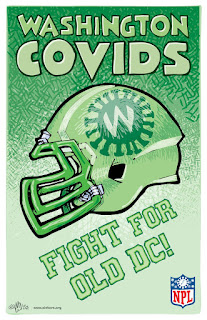 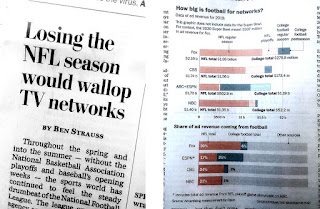 On top of all the uprising and rioting and pulling down statues and all that other great stuff, it looks as if Dan Snyder has finally gotten the message and is changing the name of the Washington, DC NFL franchise to something that isn't a horrid racial slur.

With a decision like this, of course, there also comes the usual flood of suggestions and proposals — and I'm certainly not one to shirk my creative duty.

I, for one, think the new name of the team should be the Washington Covids, because our policies and attitude have been like a plague around the world, and also because Americans are pretty much banned from entering any other country on Earth at this point.

And, as luck would have it, the July 8th Washington Post featured an article which basically details the moaning and wailing from NFL sponsors and TV advertisers if the pandemic precludes any chance of even actually playing a season this year. It's pretty obvious they
don't really give a shit about the sport; they just need some guys playing football to put on TV so that all the corporations who flushed down all that marketing cash can show us their goddamn advertising.

So, basically, no NFL = capitalism takes a bath. Cry me a goddamn river.