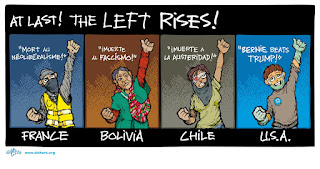 
It seems that everywhere you look around the world these days, the Left is gathering strength and taking the streets, often organizing and acting outside the constraints of standard-issue electoral politics. The issues they address are international, issues that the People can unite around worldwide: neoliberalism, austerity, fascism, militarism.

Everywhere except in the United States, that is. Here in the Evil Empire, what passes for even a merely "progressive" Left is turned inward, all about the "election", all about "beating Trump", pouring all of its available energy into getting one guy elected President. Said "sociailst" hero will, of course, once again — as in 2016 — cave at the Convention and endorse whatever vile-ass, useless centrist the Democrats want to serve up, and leave the Left with nothing.

Now, I didn't graduate PoliSci — I was just some hippie arts major — but it would seem to me their time and energy would be better spent breaking out of the prison of American electoral "democracy" and organizing and acting around the global issues and building international solidarity instead of pissing it all away on a process known to be compromised by capitalism, and rigged against the People.