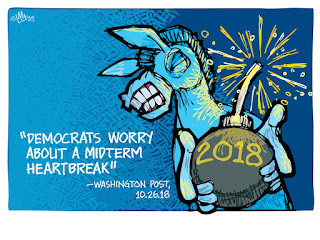 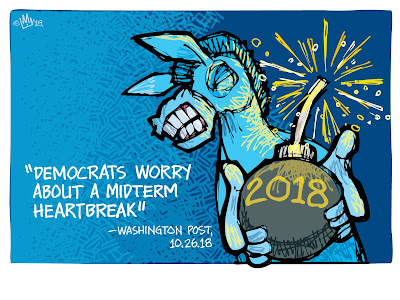 So, this is how it ends – not with a whimper, but with a bang.


All year, we've heard all manner of cocky smack talk out of the Democrats about a "Blue Wave" and how they're going to sweep back into a majority on the Hill... but here we are less than two weeks out, and suddenly they're getting all jittery and revising expectations downward, it seems. In the past couple of weeks or so, the cocky talk has been replaced by increased amounts of desperate scolding, hectoring, pleading, shaming, browbeating, practically screaming at us
to vote. 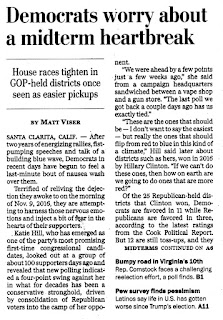 Mind you, the Democrats haven't given us anyone or anything to vote for since about 1972, and nowhere was this fact more glaring than in the past twenty-odd years since Bill'n'Hillary showed up and sucked all the oxygen out of the place.

So, here they are now, with no real record of progressive achievement in the past thirty years to point to, no real vision of a better future, pretty much nothing except to run against Russia and constantly scream at us to vote all friggin' day and night.

...and, while inspired by the Post headline, here's the song that was stuck in my head as I drew this; everybody has sappy old tunes they  love in spite of themselves, and this is one of mine: