The Triumphs and Troubles of Telling the Tyler Story
Carol Tyler will discuss her creative life in Comics to a 'T': The Triumphs and Troubles of Telling the Tyler Story. A pioneer of the "autobiographical" comics genre, she uses her own experience to tackle the complex issues of the human experience. With grace, humor, and style, her work has helped shape the direction of comics. This includes "The Hannah Story," a powerful story about loss, which was named one of the Top 100 Cartoons of the 20th Century. Carol was recently given the title 'Master Cartoonist' by CXC, at the Billy Ireland Cartoon Art Museum in Columbus.
Tyler's 2015 book Soldier's Heart, about her Dad's trauma from WWII and its impact on her family, received a Gold Medal Award from the Society of Illustrators, the Cartoonist Studio Prize from Slate Book Review, eleven Eisner Award nominations, two Ignatz Award nominations, and was twice a finalist for the Los Angeles Times Book Prize. Carol's latest book, Fab4Mania, details her personal obsession with the Beatles and her concert-going experience as told from her thirteen-year-old self's point of view.
Join us for an engaging talk by one of the comics industry's finest!
This is the 6th annual SPX festival program sponsored by the Serial & Government Publications Division.
Friday, September 14th, 12:00 pm - 1:00 pm
West Dining Room, 6th Floor, Madison Building
Library of Congress
Sponsored by the Serial and Government Publications Division
For further information contact: Georgia Higley ghig@loc.gov or 202-707-2963
Please request ADA accommodations five days in advance at (202) 707-6362 or ada@loc.gov 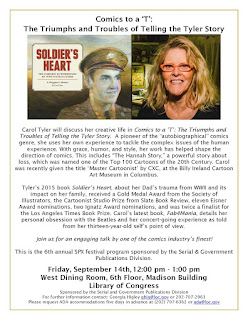