I was able to briefly stop by last night as Rob Rogers made a few short remarks about an exhibit of his cartoons, including 10 original pen and ink drawings and the companion colored prints critical of Trump that a Pittsburgh newspaper refused to print before they fired him. Also included are prints of sketches that they turned down before they became completed cartoons. Rogers' contentious relationship with the papers new editor has been written about extensively and soon after he was fired, GW announced they would exhibit his cartoonist directly across the street from the White House complex (information from their press release follows the images). The exhibit is sponsored by GWU and the American Association of Editorial Cartoonists. AAEC president Pat Bagley and Washington Post cartoonist Ann Telnaes contributed to the text of the exhibit.

The sold-out event drew local cartoonists Mike Jenkins, Joe Sutliff, Carolyn Belefski, Politico's Matt Wuerker, and Al Goodwyn a freelance cartoonists who appears locally in the Washington Examiner, in addition to Library of Congress curator Martha Kennedy (whose exhibit on women cartoonists is on display at the Library), and the Washington Post's Michael Cavna.

More photos can be seen here. 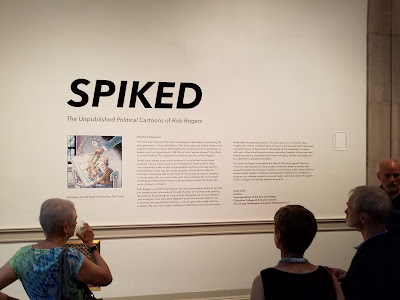 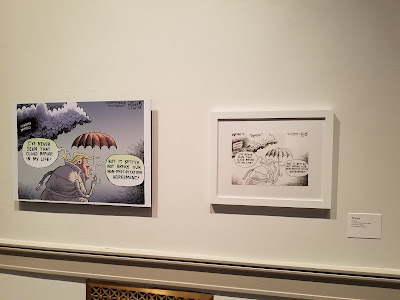 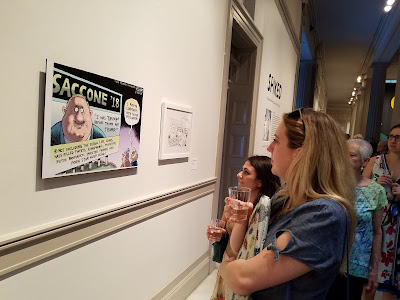 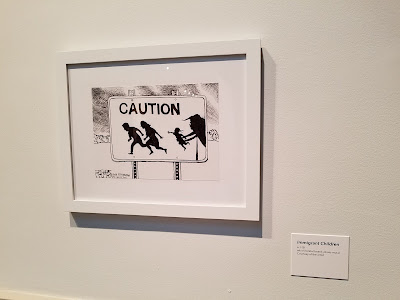 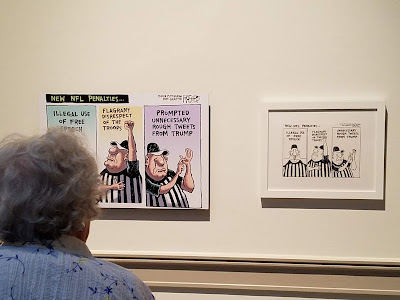 'Spiked: The Unpublished Political Cartoons of Rob Rogers' Opens at the GW Corcoran School of the Arts and Design

WASHINGTON (July 18, 2018)-The Corcoran School of the Arts and Design at the George
Washington University opened "Spiked: The Unpublished Political Cartoons of Rob Rogers"
today. This pop-up exhibition in the atrium gallery of the Corcoran School's historic Flagg
Building features 10 finished cartoons and eight sketches that went unpublished by Rob Rogers'
employer, the Pittsburgh Post-Gazette, between March 6 and June 3, 2018.

Mr. Rogers served as the editorial cartoonist for the Post-Gazette for 25 years, until his firing in
June 2018. Prior to his dismissal, the newspaper refused to publish a series of cartoons
produced over three months.

"I believe the role of a newspaper is to be a watchdog, keeping democracy safe from tyrants. I
hope that visitors to the exhibit get a sense of the important role satire plays in a democracy and
how dangerous it is when the government launches attacks on a free press," Mr. Rogers said. "I
am excited to have my original cartoons on display at the Corcoran. The fact that these are
cartoons about the president and now they will be on shown a few blocks from the White House,
that is pretty incredible!"

The Corcoran strives to promote diversity of thought and experience, address critical social
issues and educate the next generation of creative cultural leaders.

"Mr. Rogers' work has tremendous educational value to our students by speaking to the skills of
technical virtuosity, iteration, perseverance and creative methodologies on how to critique
power," Sanjit Sethi, the director of the Corcoran said. "His work also becomes a powerful point
of departure for this community to speak with each other about issues around censorship,
freedom of the press, journalistic and creative integrity and the consequences of hypernationalism to a democracy."

The Corcoran organized "Spiked" in conjunction with University of Pittsburgh's University Art
Gallery and in collaboration with the Association of American Editorial Cartoonists.
"Freedom of speech is more than words. It's pictures, too," Pat Bagley, president of the
association, said. "This exhibit draws attention to Rob Rogers, a popular voice at the Post Gazette
for 25 years. It points to what people in power do to people who draw funny pictures of
the powerful and why that is an important measure of a free and open society."

In addition to the exhibition this summer, the Corcoran will host a series of conversations this fall
regarding issues around censorship, freedom of the press, journalistic integrity and the consequences of nationalism to a democracy, in collaboration with both the Association of
American Editorial Cartoonists and GW's School for Media and Public Affairs.