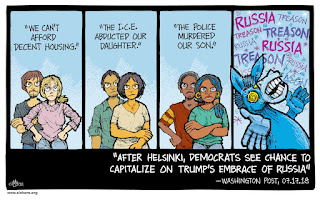 So, this makes it official: the Democratic Party doesn't care. They aren't running in the midterms on the issues of skyrocketing college tuition, income disparity, police terrorism and murder, or any other issues directly affecting anyone remaing who bothers to vote -- they think they're going to surf that "Blue Wave" into a majority on the Hill by ramping up the krazy on their empty, hollow conspiracy theories and bargain-basement McCarthyism.

Those of you from outside the US looking in on the state of politics and media discourse here might guess that you were watching a community theatre production of an Ionesco play, and you would be absolutely right. The worst of it, though, is that those of us living here are all pretty much trapped in the play whether we like it or not.