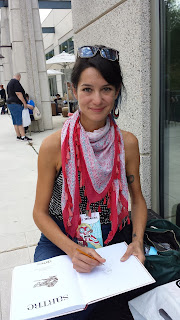 Anais Depommier is a young woman illustrator who has just had Sartre, her first graphic novel (really a graphic biography) come out in English from NBM Publsihing. She attended the 2017 Small Press Expo and I got the opportunity to interview her there.

Her NBM biography is charmingly translated rather literally (and a little outdated as you'll see later in the interview): Anaïs Depommier was born in the late 1980s in a small village in the Southeast of France. Growing up a close friend of Mathilde Ramadier, they can't do enough sleepovers from one's house to the other. Inseparable at school, they spend their weekends building huts in the bush, watching the gendarmes go by, playing "Mouse Stampede" on a Macintosh Classic, and reading many comics. When it becomes time to prepare for the entrance exam to art school, they meet later in the evenings at the painter Jean-Michel Pétrissans' workshop in Valence.

Anaïs studied drawing for four years, then co-created the OneShot workshop where regular life drawing classes and other exhibitions are held. She now lives in Paris and works in comics, graphics and animation design. 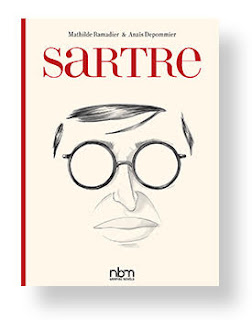 For those not familiar with the French philospher Sartre, NBM's blurb for the book reads: For some he was the philosopher of existentialism, for others the constant provocateur, the politically engaged author, the uncertain militant, the repenting bourgeois, the life companion of Simone de Beauvoir… From his first readings in the Luxembourg Garden to his refusal of the Nobel Prize for Literature, Jean-Paul Sartre was all of this at the same time.

Mike Rhode: So SPX is your first American show... is it a little overwhelming?

MR: And Sartre is your first book in English?

AD: Yes, and also my first graphic novel. And also for the writer Mathilde Ramadier, actually. It was our first book.

MR: Did you propose the book together to the publisher?

AD: We've known each other for a long time, so we created the project together and then asked some editors [if they would be interested in it].

MR: You didn't serialize this in a newspaper first; this is an original graphic novel.

AD: Absolutely, we started everything through a contract with our French editor. Dargaud is our publisher; it's one of the main and oldest ones in France.

MR: Did you have the book already put together, or was it just a proposal when you approached them? 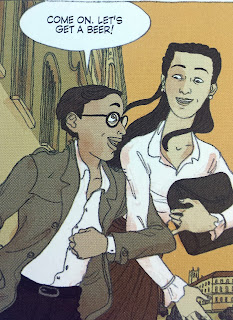 AD: It was just a proposal. Works like this in France are usually [done this way now].

MR: So they gave you an advance?

MR: Moving on from the business side to the subject, so why did you pick Sartre?

AD: At the beginning, it was the writer's idea. She got her masters degree in philosophy, writing about Sartre, and she's passionate about comics (like I am). She thought it would be a good idea to depict him in comics, so she asked the artist that she knew - me - and I totally agreed with her. We started like this.

MR: Did she give you a script that you then broke down?

AD: Absolutely. In the beginning, she explained to me in conversation what she wanted to say about him, and then she wrote all the script. I made my own layout. She didn't really criticize the scenes - I decided the layout myself.

MR: Right, so she didn't give you thumbnails or sketches? 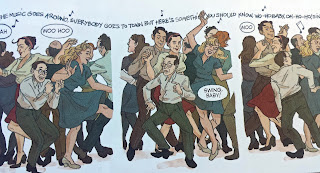 MR: This is a fairly substantial book... how long did it take you?

MR: Did you have a hard time illustrating any action in a philosopher's life? I saw in the early pages that he was a rough-and-tumble school boy. 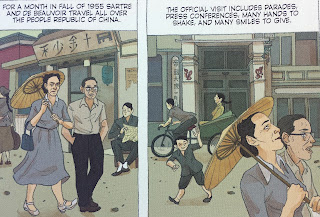 AD: Absolutely. It was kind of fun actually to draw that part. [laughs] It was interesting to show this man not just as an intellectual philosopher, a serious guy, because he had a lot of humor. I liked the pages where there was more action, and all his travels, all the trips he made. It was interesting to read the documentation and get the atmosphere.

MR: Did you work from photo references?

AD: A lot. And also from videos. We still have some interview videos of him. He died in 1980. In his last fifteen years, he was not that active outside his house. He was really sick.

MR: Who is the audience for this in France? Is this an all-ages book in France? 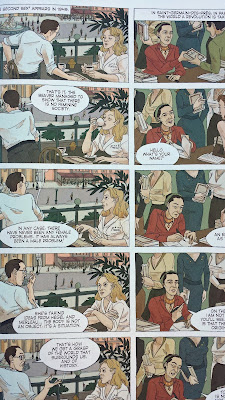 AD: Yes, and that's interesting. In festivals, we meet a lot of professors who don't really read comics, but they are curious about it, so that's great for us. Also, the opposite - comics lovers who know Sartre by name but don't know his books and they buy our book because they are curious.

MR: Were you influenced by any of the other biographies that came out? Anne Simon was here last year [at the Alliance Francais] to talk about her books that had been published in English.

AD: Yes, Einstein and Freud... I met her because we have the same French publisher. I think her first book, Freud, was published during the time we were doing the first pages of our book. So she's not really an influence because she has a totally different point of view. I really like her work - it's totally another thing, another approach.

AD: Right now, I'm just starting to work on another story. It's still really, really beginning. It's fiction, and kind of dark.

MR: Your own characters?

AD: Yes. I will work with another writer, an Italian one, and we'll see how it goes.

MR: Is this your first time in America?

AD: Yes it is, and it's really exciting. 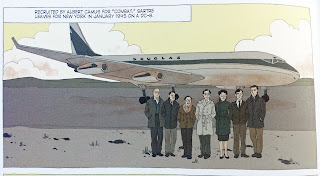 MR: Where are you going next?

AD: Before I was in Baltimore at MICA and I met some students, and it was really interesting. Tomorrow I will be at the Brooklyn Book Festival, and then next week I will be in Miami in an art school and then a book store.* The counrty is really different already even between Bethesda and Baltimore so I cannot imagine New York and Miami.


MR: I'm sorry you don't have the time to see Washington while you're here since it was influenced by Paris. Any thoughts about the Small Press Expo? Have you been able to walk around?

AD: Just a little bit this morning, and I will go again now. It seems to have really cool work; so many different comics and illustratioins. It's full of variety and I love it. It's a little underground and I really like that.

MR: SPX isn't a normal American superhero convention. In France, do you usually attend Angouleme or other festivals?

AD: I've been there twice, but always just to visit. It's a huge festival, and editors send their author with a new book, but Sartre was published in March, and the festival is in January, so it didn't match. Still, it's a crazy festival and a really interesting place to go.

MR: Have you done other French shows then?

MR: Do you see a difference about a show in France and one in America?

AD: Here in America everything is bigger. Also the buildings too. It's impressive. I can find the same family atmosphere, a relaxed and fun atmosphere is a common point, for sure.

MR: I should ask you about your background before we end...

AD: What I did before my book? I was in university, in École Émile Cohl, a traditional school with an academic program, and I studied comics and illustration there. After that, I created a studio with friends, and did exhibitions and drawing classes, still in Lyon. Then I went to Paris and I started this book. I've made a lot of little works for newspapers, and been a graphic designer for lawyers,. This book took me so much time. I'm also doing work in Lyon Capitale, a French newspaper that has several pages a month about the history of the city. It's not really serious. There's always a historical background, but the story can be fictional. I'm still working for newspapers as a graphic designer, and I'm starting a new book, but I've also moved to Rome. I don't live in France anymore.

AD: It's a personal choice, not a business choice. It's a gorgeous city and I really love the Italian south.