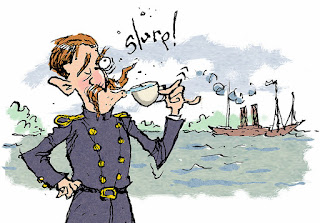 The first one is up and is by me and local cartoonist Kevin Rechin. It's a story about Walter Reed before he became THE Walter Reed.


​Mosquitoes are in the news quite a bit today. So for our first comic, we reached back to Dr. Walter Reed (1851-1902), a U.S. Army bacteriologist who helping conquer the dreaded yellow fever, but not before a few miscues along the way.