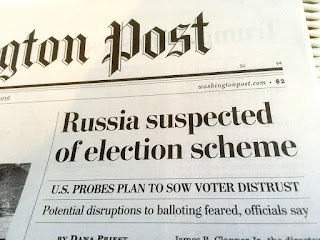 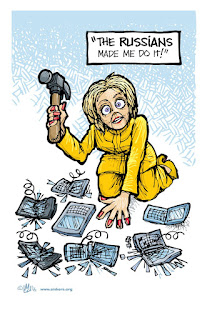 When I picked up the morning Post off my front stoop last Tuesday morning and got a look at the front page, I knew this was arguably one of their most sublimely insulting headlines ever. Here was the Ice Queen obviously destroying evidence under investigation -- along with other actions that would result in immediate firing and imprisonment for people who aren't Hillary Clinton -- and the Washington Post is queefing out yet another blast of tired old 1950s red-baiting and dick-wagging, continuing to aid Clinton and the Democrats' ongoing deflection of blame and claims of victimhood.

After over a year of Hillary and the Democrats' lies, half-truths, primary rigging, thievery, bullying, threats and insults, the Washington Post still insists that it's the Russians -- the goddamn' Russians -- who are responsible for the loss of faith and trust in the American electoral process. I don't know about the rest of you, but I don't need the Russians' help to lose my trust in American "democracy".