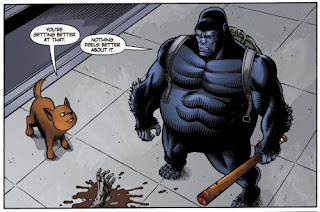 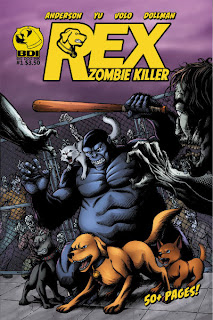 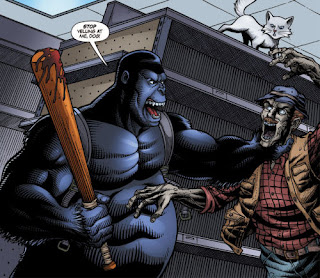 Rob Anderson here --  I'm still living in Alexandria and have been hard at work making comics. I'm writing because my first comic book is FINALLY in the Diamond Previews catalog this month, published by a company called Big Dog Ink. It's an "animals vs. zombies" tale called REX, ZOMBIE KILLER -- sort of like THE WALKING DEAD meets HOMEWARD BOUND, if either of those stories had a gorilla with a baseball bat. In a nutshell, it's about a small pack of animals trying to cross the country after a zombie apocalypse.
---------------------------------------
PRESS RELEASE
---------------------------------------
ANIMALS VS. ZOMBIES IN "REX, ZOMBIE KILLER #1"
Get Ready for a Gorilla with a Baseball Bat!
In April 2012, comic book publisher Big Dog Ink will release the hounds, as three dogs, a cat, and a gorilla with a baseball bat battle the walking dead in REX, ZOMBIE KILLER #1.
In the wake of a zombie apocalypse, a hyper-intelligent Golden Retriever named Rex, a sign language-speaking gorilla, and a small pack of animals begin a perilous cross-country journey to find safety...and a home.
"I've always wondered what happens to pets when the zombies arrive," explained writer Rob Anderson. "And I've always loved stories that show the heart and tenacity of animals, like WE3 and HOMEWARD BOUND / THE INCREDIBLE JOURNEY. In REX ZK, the animals are trying to make their way across California to an underground government bunker where the scientist who raised Rex is now in hiding. But Rex isn't necessarily revealing everything he knows about the situation to his pack."
"This is a story I've been wanting to tell since at least 2008, because it combines three of my big passions: animals, zombies and comic books," Anderson said. "My constant writing companions are my dog and cat, and they're well trained for the coming zombie apocalypse with their patented 'play dead' routine."
The book was also a perfect fit for cover and interior artist DaFu Yu. "From an artistic standpoint, I love drawing monsters, and zombies fit in that category," Yu said. "I'm already detail-oriented in my style, but I go a little crazy when I draw zombies!"
Big Dog Ink Publisher, Tom Hutchinson, added, "This giant-sized one-shot is the latest addition to our creator-owned titles, and it's a unique, high quality story at a special price. We're very excited to add it to the BDI catalog!"
REX, ZOMBIE KILLER #1 is written by Rob Anderson (ANIMAL CONTROL: SPECIAL CREATURES UNIT, GREAT ZOMBIES IN HISTORY) with interior and cover art by DaFu Yu (GRIMM FAIRY TALES, WONDERLAND ANNUAL), colors by Kevin Volo, letters and design by E.T. Dollman, and edited by Paul Allor (CLOCKWORK).
The double-sized, 56-page one-shot ships in April at a special price of only $3.50, and will be available for pre-order in the February 2012 Diamond PREVIEWS catalog. (Order Code: FEB12 0806) The comic book will be in full color in standard comic book format. It is rated TEEN+ for mature themes and violence. Additional one-shots are planned for the future.
About Big Dog Ink
Founded in 2009, Big Dog Ink (http://www.BigDogInk.com) is the publisher of comic book properties such as PENNY FOR YOUR SOUL, CRITTER, and the upcoming werewolf/vampire horror series, URSA MINOR. Big Dog Ink's new hit series, THE LEGEND OF OZ: THE WICKED WEST, charted in the "Diamond Top 300" list in November of 2011.
For more information on REX, ZOMBIE KILLER, visit: http://www.RexZombieKiller.com
------------------------
CONTACT:
ROB ANDERSON
rob@RexZombieKiller.com
IMAGES & ONLINE MEDIA KIT: http://www.RexZombieKiller.com/p/press-info.html
...||